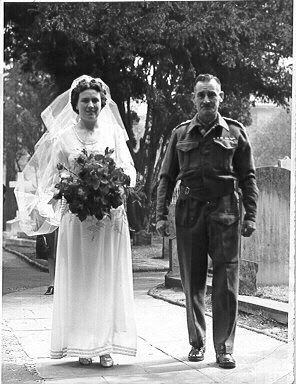 I have been reading Tomme's "Maybe A Surprise Or Two" blog on Near Death Experiences yesterday and it has taken me back a long, long way....

Before the term "Near Death Experience" was coined, my mother would often tell of her own NDE. It happened while she was pregnant with me during the Second World War, when my father was a Canadian soldier and she a young British Nanny. It was a terrible pregnancy with my mother having pernicious vomiting throughout, her weight dropping to 90 lbs. She could keep no solid food down and she was kept alive through feeding tubes.

As a staff Sargent responsible for his men, my father had to live on base. My mother lived in a small cottage beside the base and was cared for by my grandmother. My father awoke one night, literally soaked with swet, haunted by a terrible premonition. Rushing to the officer in charge, he was given a special 24 hour pass and then ran the two miles from the base to the cottage, only to find my mother collapsed at the bottom of the stairs, my grandmother in a complete panic. He phoned for an ambulance and my mother was rushed to the hospital on the military base.

But in her sixth month of pregnancy my mother died.

She saw herself leave her body through the large toe on her right foot. Death was the most peaceful feeling she had ever known. Hovering at the level of the ceiling she could look down at her wasted body with a feeling of relief. She saw the light, she felt its alluring pull, but before she could enter, she felt herself reluctantly return to her body as doctors and nurses came rushing to help her.

Unknown to my mother, the doctors decided to conduct an abortion the next day, it being a choice between my life or hers; but by the morning she was feeling hungry and rapidly gained weight through the final trimester.

I was born, well as normal as I am. one of my closest shaves with death being three months before I was born.

The image above is of my mother being walked to Church by her father on her wedding day. She will be 90 in February.