Mr. Toast's Tea Party--And How I Named My Blog Day

"Oh, I forgot to tell you. We're going to a tea party today."

"Well, that's too bad. You know how much I love a good tea party, but I think I'm having chemo today."

"I will." I asked doubtfully.

"A virtual tea party. In Aspen. You will love it. But first we're going to Whistler to pick up some special friends to come with us."

To find out if I loved it, who the special friends were and what Linda had planned, check out Linda's blog HERE.

Or, if this is your cup of tea and you want to just join in the fun, drop into the party HERE 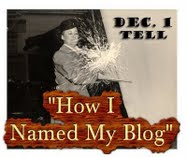 But before I rush off to the Party, Ruth at Synch-ro-ni-zing is holding a "How I Named My Blog Day" requesting we all give an explanation of how our blogs came by their monikers.

I have a philosophy of life.

That sounds a little pretentious. But I'm not unique in this, nor is having a personal philosophy of life elitist in any way.

You have a philosophy of life as well. It may be more elaborate than mine, it may be better reasoned, it may even be more passionately held. Or your philosophy may be more felt than articulated, less well organized and may contain more elements destined to cause you harm.

But either way, you cannot escape having a Philosophy of Life that guides you and protects you in important ways. My life's philosophy has led me along certain pathways to certain destinations.

Over the next few weeks and months I want to share this philosophy with you. Feel free to join me.


There have always been explorers from the earliest times of human existence. Sometimes they were driven to explore by desperate circumstances following famines or drought. Most of the time it was just a part of their nature. They couldn't not explore.

Where others were content, they were driven to learn. It was sometimes not a survival trait, at least not for the explorer. For the tribe, having explorers in their midst usually provided an evolutionary and competitive advantage.

In those early times, exploration usually meant seeking out new territory. Learning what was over the next hill, what was around the next corner. Those were the days of the physical explorers whose current embodiment are the astronauts who may soon be living, and dying, on the Moon or Mars.

But there have always been intellectual explorers as well. In the beginning they were the shamans who sought the reasons for disease and misfortune, who wondered about the healing powers of herbs and plants, about the forces that moved the moon and the stars, who wondered at the seasons and the storms, who found the behaviour of animals and other members of their tribes of compelling interest. They guessed at explanations and put those guesses to the test with little understanding of the laws of science or the ubiquity of coincidence.

As always for explorers there is trial and a great deal of error.

But because of their courage to explore, we all learned. Gradually and painfully.

It makes for an interesting life.