Fire at the Guild 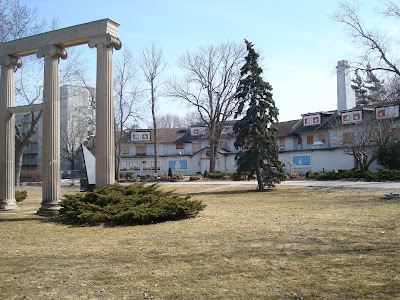 The old Guild Inn was the subject of yesterday's post. Since I've spoken of it before and undoubtedly will again, I thought I should give you a more complete picture of its history. Especially since it has a personal connection to my own family.

Last Christmas morning brought some unwelcome news. We missed most of it because Christmas is not typically a time we spend listening to the news. But a phone call from my daughter alerted us and I put on the Radio to catch the tail end of the story.

Kathy told us the Guild was on fire.

The Guild is a sprawling 19th century mansion about a kilometre from our home. It has had an interesting existence. First as the wealthy arts and crafts style estate belonging to the Bickford family, then brought by my great uncle, Msgr. John Fraser, in the 1920s to launch a Missionary Society.

During WWII it was used as a military hospital.

It was then sold to the Clark family who used it as an alternate lifestyle arts colony. They supported "artists in residence" whose statues dot the sprawling grounds of the estate along with rescuing the facades of some of Toronto's more interesting buildings that were falling to the wrecking ball of more modern fashion. In the 1960s it was sold to the City who maintained it as a luxury restaurant and resort. Some of the famous guests staying there included Canadian PM Lester B. Pearson, Burt Reynolds, Kathleen Turner, Christopher Reeve, Sir Lawrence Olivier, Lorne Greene, Kevin Sorbo and many others.

Eventually, however, the old building required too many repairs and it has been closed and boarded up now for nearly a decade.

Fortunately the Christmas Day fire was confined to one of the outlying buildings on the property, the Studio, not to the central building itself.

The Guild is one of the most historical buildings in Scarborough and there have been ambitious plans for its renewal. Recently it has been purchased by Centennial College to house its School of International Studies. All of the buildings on the site are to be razed, however the grand stair case and the library were deemed salvageable after a decade of complete neglect by the City, and adolescent vandalism, and will be incorporated into the new structure.

Anyway, here is a short video of what I found when I went down to investigate.