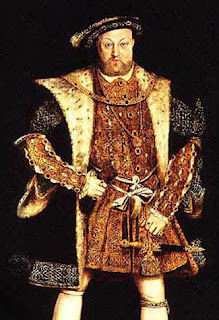 I normally don't remember my dreams, but then this was no normal dream.

For one thing, it didn't come to me in my own bed in the stillness of the night. It invaded the nightmare my life had become during my first week of combined chemo/radiation treatment. I hadn't been able to eat or drink for two days and was lying in bed in the Cancer Day Care hooked up to an IV pumping cisplatin into my veins.

When I fell asleep.

And discovered myself on the banks of the Thames River in London during the time of the Reformation. Before me, filling the entire span of the river, a giant five story stage was being pulled down the length of the Thames by teams in four row boats, thick ropes attaching them to the stage.

I was strangely aware that I was dreaming while at the same time experiencing this ancient time as all too real.

On the stage the entire pageantry of that time was being played out each on its own different level. On the ground floor of the stage, peasants were busy tilling the fields, caring for livestock and dancing to the sound of a flute.

On the next level shop keepers were hawking their wares, keeping their books, manufacturing their various products.

On the middle level the clergy were preaching and praying and shaking their incense.

Above them the nobles were feasting and jousting fighting off the enemies of the realm.

While high above them all, the King sat on his throne laughing and waving to the vast crowds who lined the river banks.

"This can't be real," I recall thinking in the midst of my dream. "A stage this size would act like a vast sail and could never be pulled down river by row boats. Even modern boats with powerful engines would never be able to keep such a thing property aligned. Not to mention upright."

And then I woke up, marveling at the capacity of the human brain to create such a vision in such detail. The dream was rich in browns and grays, I could feel the breeze, smell the pungent aroma of the river water at my feet.

Jeannette Stgermain's blog has a three part series on dreams, and it got me thinking about this one.

Does this strange dream have meaning? Is anyone out there into dream interpretation? Insights anyone? Of have you had similar dreams, or even more interesting ones you'd care to share?