Low Ebb Of A Soul And A Body In Crisis 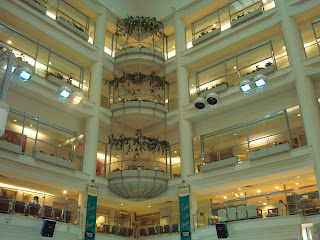 The Cancer Volunteer Driver's car pulled smoothly up to the doors of Princess Margaret Hospital for my second to last round of radiation. I thanked the driver and hopped out and the world lurched and spun.

Stunned, I reached out and supported myself against the roof of the car. But the world still spun.

The hospital doors loomed before me, thronged with patients coming and going. I pushed myself away from the car and propelled myself on shaking legs toward the spinning doors where others exiting the building supplied the motive power. In terror of collapse, I searched the lobby desperately for a free seat.

I literally collapsed into it and my private earthquake came to an abrupt end. Seemingly with no damage done.

For a while I sat quietly watching the passing parade, the endless swirl of the sick and dying as they moved with something resembling an odd dance through the massive lobby. I looked up at the tall graceful balconies high above me and took courage.

I had a brief appointment with the oncologist to discuss a frightening experience I'd had the night before when I suddenly began to throw up blood and then a half hour of radiation before I could go home and put all this behind me. But first I needed to get to my appointment because it wouldn't come out to the lobby to meet me. And there wasn't far to go, just around the corner to the elevators and down one story.

I got up slowly, tentatively and the world stayed still. Thankfully I shuffled on weak and shaking legs toward the elevators and found one just opening its door and headed in my direction.

At the radiation oncologist's department, I gave the receptionist my hospital card and the world started to spin again.

"I have to sit down," I said, collapsing into a nearby by chair. She looked at me with concern.

"Your appointment with the doctor is in the radiation clinic on the next floor down," she told me. "Would you like me to come with you?"

I was about to say no, just give me a minute and I'd be fine but suddenly realized I wouldn't be. So I just nodded my head and she came and took my arm and together we descended to the next floor, where she took over and quickly ushered me into the clinic.

I thanked her and the head nurse came and sat with me for a while discussing my various symptoms.

"The doctor needs you have some blood work," she explained "So I've sent for a porter to take you to the blood lab and bring you back to us again. So just make yourself comfortable until the porter comes."

But after fifteen minutes the porter still hadn't come.

"We have a spare bed," one of the other nurses suggested, "Why don't I just do his blood collection here, it looks like he's been through a lot and it would speed things up."

I fought my way across another earthquake zone to a curtained bed and lay on the cool crisp sheets. The day wasn't going at all as I had planned. But this felt good.

My blood taken, the oncologist arrived.

"Oh Barry," she said, a kind warmth in her eyes. "You look so terribly sad."

And she reached out and took my hand in a simple human gesture.

And I began to cry.

While the oncologist continued to hold my hand and the nurse went scurrying for Kleenex.

"It's been a long hard battle, hasn't it?" she said. "That last week of combined chemo and radiation is a terrible thing we have to put people through. Not many come through it was well as you have."

The nurse returned and I dried my eyes but my brain had turned to mush.

"You are terribly dehydrated," the oncologist went on. "We're gong to rehydrate you and you will start to feel much better. You'll get your strength back, I promise you. Now lay back and we'll get you a warm blanket."

And so I laid back on the bed and they got me a blanket and hooked me up to a two litre IV of liquid, turned off the light in the little cubicle and left me to watch the water dripping into my veins.

And gradually, slowly, drip by drip, I began to feel better. Calmer.

Until, at last, I slept.