The Wizard Of Pills 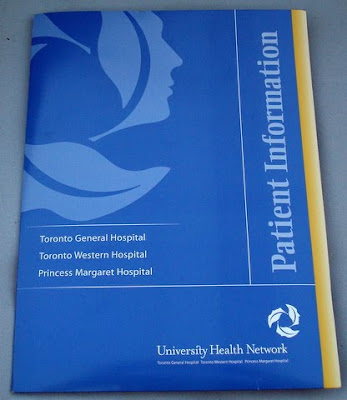 "None?" I asked in disbelief,

"None," he said firmly. "No pain. none whatsoever, throughout the entire course of this disease. There is no need for it and your body spends too much energy fighting it when that energy could be put to better use fighting the disease."

Linda and I were in one of the treatment rooms in the GI Clinic at Princess Margaret Hospital having our first meeting with the Psychiatric head of the Psychosocial Oncology Department and Palliative Care Unit. He was a tall, calm man, with a soft voice and the body of a weightlifter.

"What did you think when you heard the term 'Palliative Care'?" he asked. "What did that term mean to you?"

"Preparation for death." I told him.

"Well, we can do that too," he agreed. "But that's not what we're really all about. We're about pain management and quality of life. And it looks like the quality of your life over the past few weeks has really sucked. So we need to fix that immediately."

"Nothing we do here will affect the progress of the disease you're fighting. We will leave that up to your medical and radiation oncologists. We're here to make you feel better and maybe free up some of your energy to allow you to join back in the battle yourself. So, I'm changing all your medications....."

And an hour later, Linda and I are headed home, Linda clutching a fist full of prescriptions that will relieve my pain, stimulate my appetite, relieve my chronic and annoying cough and give me back the energy I've lost.

We drop off the prescriptions at the drug store ("Are all these for Barry!?" the Pharmacist asks in disbelief) and make it home half an hour later, Lindsay dancing for joy around our feet.

There are phone messages waiting for us. Linda settles wearily into her chair and plays them back.

"Hello," says the first voice. "This is Mary at the thoracic clinic. We have you booked in tomorrow at 9 am for a procedure...."

Across the room, I've already begun a ragged cough. You certainly do, I think. The sooner you get this fluid away from my lungs the better.

"If afraid the doctor has been called away and won't be available for your appointment...."

For Linda and I both, the room became suddenly cold and silent.

"However, I know you've been waiting quite a while for this procedure, so I've managed to book you in for another appointment at 1:30 tomorrow afternoon. Only a couple of hours later than you would have come. So we'll see you tomorrow at 1:30 not 9 as originally scheduled."

Linda and I collectively exhaled. And life went on.