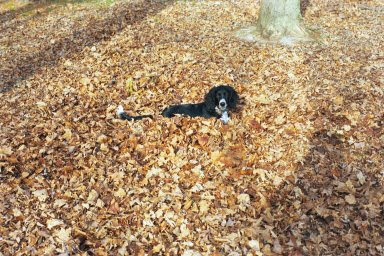 Of all the occupations Lindsay was likely to take up, the role of music critic would have been far down my list. Not quite at the accountant level, but very near by.

Despite the super sensitive hearing you tend to associate with dogs and their ability to hear notes far above the spectrum audible to us mere humans, Lindsay has shown a complete disinterest in music of all kinds until now.

Well, alright, if I happen to crank a rock song up a few decibels to see if windows really will shatter, Lindsay will beg to be let out of the house. But I take that to be an aversion to loud noise, not a criticism of a particular piece of music.

For the most part, no matter what I play, Lindsay just sleeps quietly on the floor, ignoring the whole thing.

On a Celtic kick, I was browsing through music videos on YouTube when I chanced upon a group I'd never heard of before. They were called the Medival Babes, six women who sing medieval songs in Olde English (no telling what you'll find on YouTube, right!)

By the end of the first stanza Lindsay was starting to whimper. At first I didn't associate her pain with the music and wondered if she had a burr or indigestion.

But then she came over and started to bark at my laptop. When that didn't shut the music up, she dragged herself down the hall to my office at the opposite end of the house, whimpering and casting baleful glances, all the way.

When the video finally stopped, she came bouncing back out to the living room.

Could her pain be caused by the video, I wondered. So I played it again and she immediately started to bark and headed off back to the office.

Medieval music sung in Olde English is just not to her taste, I guess.

Anyway here is the video that caused her so much distress. I you have a dog and if your dog shows any similar reaction, please let me know.