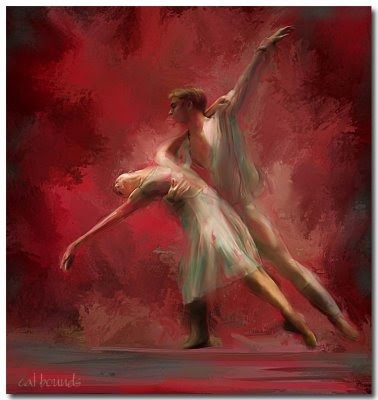 "Ten," I said in mock astonishment. "Why would I need ten berets? I don't have any hair left any more?"

We were on the upper deck of the GO train on our way to downtown Toronto to see the Nutcracker at the Four Seasons Centre, leaving Lindsay at home to complete her cleansing rituals in privacy. My nine year old granddaughter Natasha had been telling me about all the berets she had received from friends at Christmas and I had told her jokingly that I hadn't been given one beret for my newly bald head.

Natasha was insisting I didn't need one beret, I needed ten.

"If you put one beret here," she said. "And another next to it. And another. And another. They would cover your whole head and no one would know you were bald."

Griffin and I laughed. Six year old Griffin actually thought it was a hilarious idea.

The woman in the seat across the isle was struggling to keep a straight face and pretend she wasn't listening.

And the GO train glided deeper and deeper into the city.

"Alright, then we're almost there," I told them. "Better get your coats back on. We'll be getting off soon."

I was riding with the two children on the upper deck of the train while Linda and their mother had a visit on the lower level. Now we needed to get us all together again before anyone got lost in the rush of passengers leaving the train. So we made our way down the stairs to where the two women were sitting.

The train had slowed to a crawl and rolled into the darkness of Union Station. Passengers all around us began getting up and filling the isles. The women each took a child by hand and we joined the crowd, exiting the train, walking along the ancient cement platform to the stair well and down into the concourse.

Natasha and Griffin live in the small City of Guelph and don't make it to downtown Toronto all that frequently, so the city is still an overwhelming experience for them. Everything bigger and more crowded and faster than their daily experience.

"Now on to the ballet," Linda told them.

"Are we going to be there long?" asked Griffin.

"Not too long buddy," Heather told him. "Maybe a couple of hours."