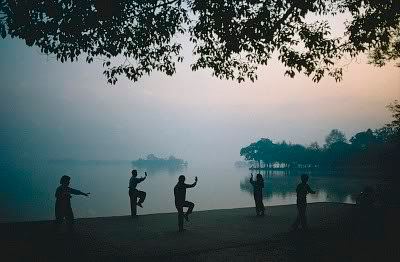 I looked at my hands dangling off the ends of my arms and wondered what she was talking about. Was there a double-entendre going on here?

"And they need to be palm down when they're descending," she went on.

I was at my second week of Tai Chi and the class was just getting started. I had missed the first week due to an oncologist appointment and would be missing every third class for the same reason. I had thought I could catch up, but the moves are proving to be complicated with many elements that had to be performed precisely so that they flowed into the next move.

I turned my hands around and my wrists then became satisfactorily limp. I looked across the room at the only other two men in the class and was reassured.

"Now into Left Grasp Bird's Tail," the instructor went on.

The class pivoted and stretched and turned, held an imaginary ball, felt their pulse, turned, stepped, reached out their right arm and made a birds head with their hand.

"No no sweetheart, look at your feet. You're going to injure yourself that way."

I looked down at my feet and looked at the feet of the woman next to me. To me they seemed to be in the same position.

Then I realized that "sweetheart", this time, meant someone else on the other side of the room. I felt betrayed. So, I wasn't her only "sweetheart"!

Despite all of the above, the class was actually going better for me this week. The previous week I was still in the midst of chemo side effects: the bottoms of my feet were numb, my joints were aching, my legs were weak to the point of trembling, the tips of my fingers felt like someone was shoving them into a pin cushion and I generally felt unsettled and agitated. I was also a week behind everyone else and was stumbling along hoping to catch up.

Linda had suggested Tai Chi as something I could do to get out of the house while she was back at work and it seemed like the level of exercise I could manage. It was also being presented at the Scarborough Village Community Centre which is a five minute drive from my home. And it was directly across the road from Tim Hortons, for when I was done.

I turned and pivoted and stepped and realized once again that I am clumsy and lack any natural grace. As numerous women on the dance floor had reminded me over the years. Before limping back to their tables.

I turned and reached and spread my arms.

"So You Know You Can't Dance" would be the only TV show that would have me as contestant.

"All right," said the instructor, who has never introduced herself since the first week which I missed (perhaps I should call her "sweetheart"?). "Let's look at the new moves for this week."

She began to demonstrate, but facing us her left was my right which made it confusing for a naturally clumsy person. Then when she turned her back to repeat the demonstration, I could follow her footwork but her body hid her arm motion.

Next week I am back at the oncologist again and will miss the class, but fortunately Linda's cousin Alan has sent me a "Beginners Guide to T'ai Chi", with descriptions of the moves and numerous photographs.

Maybe with the book's help I can figure this out.

"No no sweetheart, that's not the way!"