40th Anniversary Fiasco (Part 2 of 4)--The Finding Of Lindsay 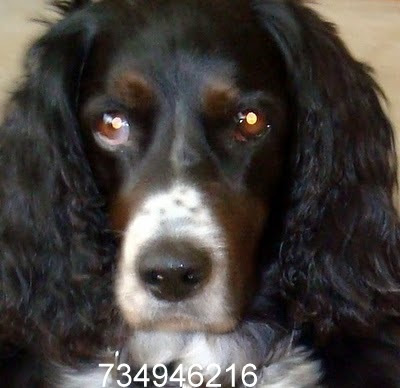 Linda, Steve and I arrived at the Scarborough Humane Society Pound on Progress Avenue at 4:50 on Friday evening. Instead of calling the general Toronto Humane Society number I had decided to phone the pound nearest to us and sure enough a black and white waggy tailed Spaniel had been picked up in our neighbourhood at 12:15 that afternoon. We were on our way to identify her and spring her from the hoosegow.

"She doesn't have a license," the uniformed officer at the front desk observed.

"No, she has an implant. We were told by the vet that if she had an implant she didn't need a license."

"So that means she would have been born in 1999? That was the year the law changed. If she was implanted before July, she didn't need a license. After July she did."

"Well, she couldn't have received the implant before July because she wasn't born until September." Linda confessed.

"We couldn't find the implant, It must have migrated over the years," the guard said. "Then she'll need a license. Plus pound fee. That I'll be $80. Julie do you want to go fetch that new dog?"

One of the four women working at desks behind her finished her keyboarding, stretched and headed off down the hall.

Five minutes later the elevator door at the end of the hall opened and Lindsay came scampering out pulling the small woman behind her. Lindsay's nails were sliding and clicking on the hard marble floors as she raced toward us, tail wagging with glee.

I bent down to embrace her as she raced down the long corridor with the young woman skidding along in her wake but an instant before she got to us she passed a box on the floor with an interesting scent, screeched to a halt and immediately turned to explore it.

"So much for joyful reunions," I said. "Well, what can I expect Lins, now that you're a criminal. A convicted felon! Found wandering the streets in a complete state of unleash."

Lindsay finally decided to acknowledge our existence and turning her nose from the box started wiggling at our feet.

We paid her bail, sprung the waggy tail con from the joint, and headed for home.

"I'm exhausted." Linda confessed. "This has been so emotional, I don't think I could face a two hour drive up north tonight."

"I'm with you on that," I agreed. "We better cancel the room for tonight and head up first thing in the morning. Besides we have that fence to mend."

And so we called the resort and explained what happened and canceled our room. And canceled the massage I had booked, while Steven went out and repaired the fence.

Then I sat down and started up my laptop and opened Firefox which immediately crashed. Taking the entire computer down with in. Cautiously I restarted it. It crashed again. I tried again. It froze. I swore.

"Something has it in for us." I said.