Day Of The Jays 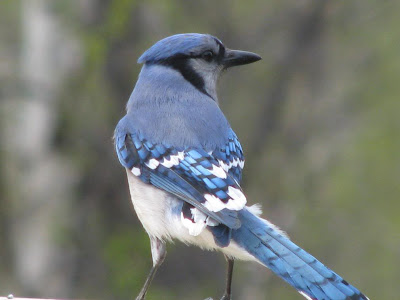 I think it had something to do with the blue colour of my housecoat.

I know it had something to do with the new bird feeder we put up back in February.

But it still felt more than a little strange.

It was early in the morning and I had made a cup of tea for Linda and I. She was sitting in her chair searching for photos of bead boards in Country Living Magazine.

I took my tea out onto the back deck where the air was a little cooler than I expected. The tea cup was warm in my hands and steam began rising from its surface. I had just taken my first oxycocet of the day and a light, but comfortable, somnolent feeling would soon be creeping over me.

Since taking ocycocet I have no longer been able to mediate. Sit quietly for a few seconds and I immediately find myself waking up after an hour long nap, a head uncomfortably full of cotton wool. It is frustrating, but maybe the sharp coolness of the air, the warmth of the tea and relaxation of the drug would work some interesting alchemy.

With a sharp little thud, a blue jay landed on the deck railing right at my shoulder.

We looked at each other. He pruned a feather on his wing. I held my breath. I had never been so close to a jay.

Then he was gone, but back in a second with a craw filled with sunflower seeds from our feeder. He ate. I drank my tea, and wished Linda would come to the door to see this.

Two more jays landed beside him.

"KA!" said one, with an ear splitting shreik.

Then they started making alternate trips to the feeder and bringing back their loot to enjoy and squabble over. While I sat still and my tea became cool in my hands.

Linda appeared at the screen door transfixed by the sight of her blue housecoated husband playing at being St. Francis of Assisi

Then one by one the birds leaped into the air and headed off in a variety of directions.

Linda stepped cautiously out onto the deck.

"What was that all about?" she asked.

I shook my head. "I wanted to call you but I was afraid I'd scare them all away."

"They must have thought you were just another jay in your housecoat."

"I wish I'd had the camera ready."

"Don't tell Patty," I said and went back to make another cup of tea.