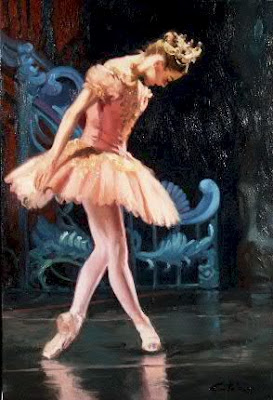 The first act went well. Not a creature was stirring in the audience, not even Griffin. The minute his attention would begin to wander, a large rat would run across the stage, or a snow ball fight would break out, or a horse would start to dance.

And then another rat would run across the stage.

As for Natasha, who had never seen a ballet before, she was just held spell bound by the entire production. Out in the lobby during the intermission, she danced and twirled; while Griffin went off to the washroom.

I turned to find her standing directly behind one of the few members of the audience who had actually dressed up for the occasion. Natasha waved me over urgently and then pointed my gaze down at the woman's shoes.

"Have you ever seen high heels so big!" Natasha's eyes lit up.

The young woman was wearing a little black dress and stiletto heels and was standing in earnest conversation with a small group of people.

All around us other people were surreptitiously glancing down at the shoes in question. The young woman was doing a good job of pretending she neither heard Natasha's booming whisper nor the attention she was gathering from others. The only outward sign she was aware of the commotion at all was a slight reddening around the back of her neck.

She and I were saved by the bell and the arrival of Griffin back from the washroom ("Griffin, Griffin come and see!" "NO Natasha, those bells mean its time we went in for the second act.")and back we went.

Unfortunately the second act is largely comprised of exquisite dancing which held Natasha entranced, but its beauty began to wear on Griffin after a while. He began to wriggle and then crawled up on his mother's knee.

The Sugar Plum Fairy appeared out of a huge Faberge Egg and leaped and twirled and bowed and danced gracefully across the stage. Griffin twitched and shrugged and shifted.

"It's not long now until its over buddy," Heather reassured him.

"But its just the same music played over and over." Griffin complained.

Heather laughed. I laughed. The people around us snickered.

"Too bad someone didn't mention that to Tchaikovsky when he wrote this, then maybe he'd have had something." Heather told him.

And I was left wondering just how big a hit Peter Illyich Tchaikovsky would have been if only he'd had Griffin around to advise him.