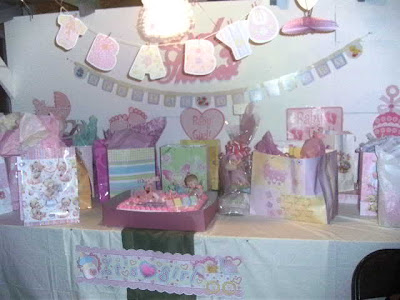 It is two o'clock on a Saturday afternoon. I am stretched out on the couch, innocently reading a book, when a phone call disturbs my tranquility. I frown, having no Karmic debt to repay, that I know of.

My first instinct is to ignore the phone. I am reading White Shell Woman by James D Doss, set on the Ute reservation in Colorado and Daisy Perika, the irritable and cantankerous old shaman has just hatched another wild plot that her long suffering nephew Charlie Moon will not find out about until it's too late. I would rather stay in Colorado, but I pick up the phone in Toronto.

My wife is at a baby shower for the afternoon so the last person I expect to hear from is her. But it is Linda's voice. She is explaining that the shower is a Jack n' Jill and I was expected to come as well.

Back in the days before my retirement, a very wise and pregnant lady at my work had offered her opinion on Jack n Jill baby showers. No way she wanted one, she said, because it meant twice the number of people and half the presents. Maybe I could get her to explain the folly of this plan to Irene, the hostess. Perhaps Irene would then ask all the men to go home?

Alas, my wife was deep into a list of the men who were present and anxious for me to be there. It sounded suspicious, but they were guys I like and haven't seen in a while. And after all, how bad could a baby shower be?

I reluctantly put Doss' book aside and head out. It is a beautiful afternoon. Warm and sunny. The snow has now melted from all but the deepest shadowy places and I make good time driving, hitting nearly all green lights as if the very fates themselves are anxious to get me to the shower.

The room is decorated in delicate blues and pinks. A chair in the corner has been turned into a kind of throne, surrounded by pink and blue streamers. A pregnant woman I have never met before is awaiting my arrival before beginning to open presents. She embraces me awkwardly, her large and apparently active protuberance coming between us.

Apparently my arrival has stirred her enormous belly to a life of its own. She is delighted and insists I feel the movement. I sense a room full of women watching me as I reach out to touch the belly of this woman I have never met before. My hand extends, there is an intake of breath as if everyone in the room had decided at that moment to suck every molecule of oxygen out of the place.

The woman grabs my hand and places on the desired spot. And I feel the sudden kicking and thrashing of new life. It is amazing. And then everyone is suddenly talking at once and I am moved out of the way by a dozen or so women anxious to have their turn.

I have passed the hand on the belly test.

Sadly, it turns out, I have missed the poopy diaper game but there is wine to drink.

"You should have been here for the poopy diaper game," Charlie says.

"Geez, you missed the highlight of the whole afternoon." Brian tells me.

I drink more wine and suddenly discover that I am saying funny things. Witty observations are rolling off my tongue, especially as we get to the gift opening portion of the afternoon.

I am learning about Carter and how most of the women would die for a chance to go to the States to the Carter store. It seems rather extreme to me, so I say a witty thing and people laugh.

Almost all of the gifts have a Lambs & Ivy jungle animal theme so I make another witty observation about naming the child to be Tarzan or Jane and people laugh. And I am suddenly the centre of attention. I drink more wine.

And my wife steers me over to meet Uncle Bob, who sits in a distant corner and he begins telling me about his multiple operations and explains the difference between medicine in Canada and the States. I try saying a few witting things to him, but he lacks a sense of humour and nothing I do or say can stem the tide of the medical nightmares he has survived.

Somehow, the remaining gifts get opened without me. People are starting to put on their coats. Coffee is served in delicate china tea cups, each one unique and none with a handle large enough to get a finger through. A small group are talking about holding another family reunion, like the one we hosted nine years ago. 2010 will be the tenth anniversary, perfect timing for another reunion.

The pregnant lady and her husband are thanking me for my gift and I suddenly realize I have no idea what that gift was. But I modestly accept their thanks anyway. They tell me they are delighted I came and I sense this is true. But I also sense my wife steered me toward Uncle Bob just in the nick of time.

I have survived my first shower.