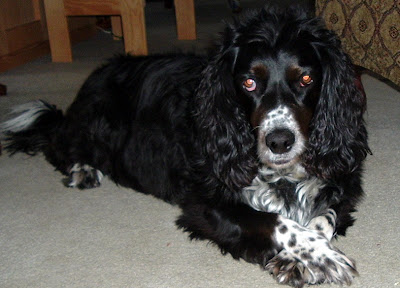 After his dog had stuck her nose into yoga, had danced with nudists, had performed "unnatural" acts with the Golden next door, the man believed he had lost all the modesty and niceness he once possessed.

He was premature in that evaluation.

It was in the early spring of 2008. An ominous calm lay heavy on the land. The Great Lake at the bottom on the bluffs had barely the strength to lap upon the beach.

None of which affected Lindsay in any way as she raced around the pathway that led to the beach like a Macy's Day Parade balloon in sudden deflation.

Barry trundled after her, climbing carefully down the 15 foot cascade of rocks to the beach below.

Where Lindsay had come to a complete stop.

A Hindi family had spred a beautiful Asian blanket on the sand. A mother in a richly coloured sari, her son in a simple white garment by her side and a Priest in orange robes knelt before a brazier from which a clean white smoke rose languidly into the air. On the carpet beside them, surrounded by flowers, was a simple urn.

The Priest was chanting softly and was oblivious to the entranced black and white audience standing a few feet away from him.

Barry would have called her back and taken her west along the beach, but she had already passed beyond them and he was afraid, very afraid, that if he called her she would disrupt their ceremony.

One of Lindsay's (many) faults is an excessive friendliness. She had never met a person who didn't delight her to distraction. A polite dog, she also never missed an opportunity to greet people, especially strangers. Especially strangers who were down on her level.

Until now, when she simply stood and watched and listened.

Amazed, and not believing his luck or his eyes, Barry decided the safest course would be for him to quietly pass the family by and continue on down the beach. He walked down to the water's edge and passed the little intimate ceremony as quietly and respectfully as he could.

And that is when the Priest began tapping a small gong whose crystaline sound rang out along the beach.

Lindsay screeched to a halt.

Oh Lord, this wasn't going to be good.

Lindsay turned toward the sound.

Lindsay raced back down the beach as if it were calling her to dinner.

And then she did the most unlindsay-like thing. She halted at the edge of the carpet.

Gong! The Priest chanted. And the woman and young boy were in tears, their eyes transfixed, not on the dog standing inches away from them, but on the small urn beside them.

All of nature seemed to hold its breath.

The Priest rang the gong one more time, raised his hands and chanted louder.

And Lindsay lay down on the beach and watched, respectfully.

Based on past experience, Barry didn't trust her. So he quietly walked up beside her and slipped on her leach.

Her eyes transfixed on the ceremony, Lindsay came away with great reluctance. She paused to look back at the family many times before finally they were a safe distance away. Barry led her up another path to the top of the bluffs, and walked back to the car park before he began to breath again.

Maybe she was starting to grow up?

Barry wondered what unexpected adventures that would bring.