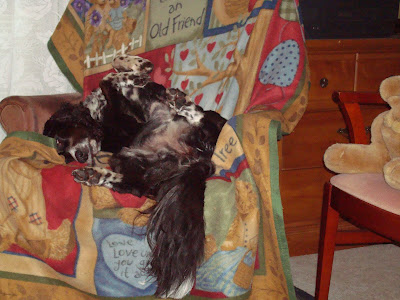 When the nice but no longer quite so modest man thinks of Lindsay, the image of blurred motion comes to mind. He has spent many fruitless hours attempting to photograph Lindsay only to end up with pictures of a dog tail exiting stage left.

As an English Springer Spaniel she has abundant energy. Without a couple of very long walks each day, her need to move creates chaos within the house. Of course this has proven beneficial to the man, who has lost weight and gained some muscle tone. He has taken to calling Lindsay his personal trainer.

However, she is also a profoundly accomplished sleeper. Never more so than on the night of October 25th 2003.

At 2:30 in the morning, the man was awakened by a thump on the deck at the back of his home. He rose quietly from his bed and peeked out the bedroom window. where he saw two men on his back deck.

"What is it," whispered Linda.

"Somebody's on our deck. I'm phoning the police." the man whispered back.

The man quietly phoned the police and within two minutes, six police cars were parked at the front of his home, their lights flashing n the dark. It reminded the man of his last visit to a carnival.

The sound of felons running and cursing could be heard as they leaped from the deck and raced down the length of the backyard.

The man and woman got up and looked out the french doors at the rear of the house. Their yard was filled with police, rushing to and fro, flashlights piercing the dark like light sabers stabbing into the night.

Still another police car arrived at the front of their property, this time it was the K9 Unit. Two police dogs and their handlers rushed from the car and ran down the side of the home. The nice but no longer quite so modest couple's back yard was now filled with police and the K9 Unit yelling and talking and discussing the situation.

One of the German Shepherds picked up the scent and went tearing off down the lawn leaping up and over the six foot back yard fence. The police all rushed from the yard in hot pursuit.

Fully awake now, Linda made coffee and the man and the woman sat and discussed the events of the evening. About half an hour later, a police officer came knocking politely on their door.

Enraged, Lindsay appeared out of nowhere, barking furiously at the police man, leaping repeatedly up the length of the door to the small window at the top where she could see his policeman's face.

The kind but no long quite so modest man held her back and attempted to calm her down. "Where were you when the bad guys were trying to break in," the man asked her.

"That's a great dog you've got there," the policeman told Linda. "I'm surprised anyone would try to break in here with your dog to protect you."

It was probably the tension of the evening, but that struck Linda as so funny she began to laugh. Through tears she explained how Lindsay had slept through everything until the officer arrived.

They never caught the two men but the police dogs tracked them back to the main road at the top of the street. However the men, or more likely teenage boys, did leave the bikes they arrived on in the driveway and these were confiscated. The police cars pulled away and the home returned to its usual peace and calm.

The nice but no longer quite so modest couple were awake for several more hours. Lindsay, meanwhile, having saved us from the police, went comfortably back to sleep.