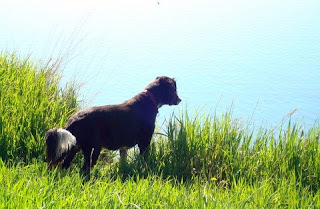 Like many young girls, Lindsay took an interest in exotic far Eastern religions. She studied Yoga at one point and was fascinated by Hindi ceremony at another.

The no longer quite so nice or modest man had no idea she had taken a spiritual bent when he set out to take her for a walk along the bluffs one calm and sunny early morning in spring.

Indeed, it has been argued, by Linda, that Lindsay had no idea Yoga existed when they set off that morning. If she is correct, then Lindsay's discovery that day would have come as a revelation.

Normally, in the early morning hours, man and dog have the beach at the bottom of the bluffs to themselves. But not always. You can never tell what may be hiding in the bushes or lurking around the next bend.

And so it was on that morning, that as Lindsay turned a corner on the bluffs she encountered a beautiful and lithe woman doing yoga on the beach. The woman considered herself all alone on a promontory with waves from the great lake crashing against the rocks in counter-point to the serenity of her mood.

Her commune with Nature was soon to become a deeper, and more direct, experience than she had anticipated.

She was doing the sun salutation, much to Lindsay's amazement. The little dog had seen nothing like it. And wanted to know more.

Lindsay had run on ahead of Barry and when he rounded the corner he was struck by an incredible sight.

In her discovery of Yoga Lindsay had been drawn by some deep inner spiritual urging toward the graceful movements of the woman on the beach. Who was facing the waters of the lake and unaware a small dog was cautiously approaching her neither regions.

Before Barry could shout out a warning, the woman reached that part in the sun salutation where she raised her bum high in the sky to a point where it unexpectedly reached the cold wet nose of her newest acolyte.

And Barry had a lot of explaining to do. And a lot of apologizing. He didn't know Yogis could get so angry.

Little did he know Lindsay, having mastered yoga, would next be taking an interest in Hindi ceremonies.