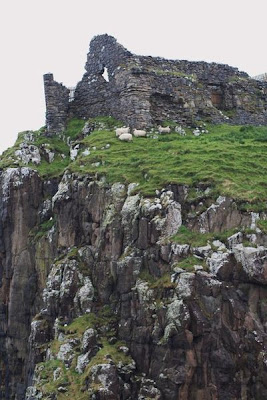 The wind is fierce high above the North Atlantic. Here a mighty castle once stood defiantly in its wake, rooted to the solid rock, sentries posted along its walls, their eyes riveted on the distant horizon for the first terrifying glimpse of Norse Viking sail.

Now battered by the centuries, the remnants of Duntulm Castle still cling to a shear rock face on the extreme Northern headland of the Isle of Skye.

It was built by the MacDonalds in the 14th Century as defense against the Norse but abandoned when the infant son of a Clan Chief fell to his death from the rocky walls.

In punishment his nursemaid was set afloat alone on the North Atlantic. If her spirit remains to haunt these walls, as many have claimed, eyes hallowed and carrying the limp body of a young boy in her arms seeking to return him to his father, it is hard to believe her scream could be heard about the shriek of the winds.

Two other ghosts are said to haunt this wind swept castle ruin, Hugh MacDonald who was locked in the dungeon and starved to death and the weeping of Margaret MaDonald, shunned by her husband after losing an eye in an accident.

This post is for my friend Fairweather, who enjoys reading a spooky post almost as much as she enjoys writing one.