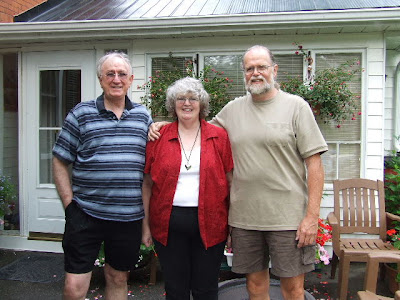 Yesterday I posted a description of our recent vacation. It was all true, but it left a few things out, namely all the embarrassing stuff.

TRAGIC SUICIDE IN A SMALL RESTUAURANT

To thank Alan and his wife Lynda for putting us up for a few days, I had invited them out to Cambellford's finest restaurant. They were eager to share and delighted to show off the finest their little town had to offer us big city folk.

A chef from Toronto had moved to Cambellford and had opened a highly respected restaurant in a Victorian home on the edge of town. A small and intimate place, it had only ten tables but everything was perfection, from the crisp table cloths to the tuxedoed maitre d'. All of the tables were filled with elegant people in hushed conversation, many of whom had traveled considerable distances for a unique culinary experience.

Alan, now retired, but a former Deputy Minister of the Environment for the Province of Saskatchewan, knowledgeably ordered a local red wine from a new winery that had just opened nearby, whose fare hadn't even made the wine list yet. The waiter was pleased and impressed with our table's insight and sophistication.

Unfortunately amid the perfection was one unwelcome guest.

No sooner had the wine been opened, the cork sniffed, a taste poured and savored, its legs admired and our glasses filled, than a deer fly began buzzing around Alan's head. He ignored it. So it transferred its attentions to Linda, who was not so sanguine, gave a little sophisticated shriek and tried swatting it away.

This attracted the maitre d's attention and he danced around our table flicking at it with a napkin.

Odd though the performance was it seemed to do the trick, the fly vanished.

I was complimenting Alan on the restaurant's novel entertainment when I discovered where the fly had gone. Depressed at being so unwanted, it had committed suicide in Alan's wine glass, where it floated in the deep red liquid, dead but with a contented smile on its little face.

In the midst of telling us an amusing story, Alan suddenly reached for his wine glass and raised it to his lips.

"Alan!" I shouted. The elegant restaurant went silent. Already the centre of attention due to the dance of the maitre d', other diners were coming to view us part of the evenings entertainment. What will they do next?

Alan looked at me, his glass poised inches from his mouth.

"I know where the fly went." I told him.

"Where's that?" asked Alan, touching the glass to his lips and tilting it back.

"In your wine glass."

Alan paused, lowered the glass, peered inside. The other diners leaned toward our table expectantly.

STAY TUNED FOR TOMORROWS ADVENTURE, THE GHOST OF THE CHATEAU LAURIER.

Photo: myself, Linda and Alan.