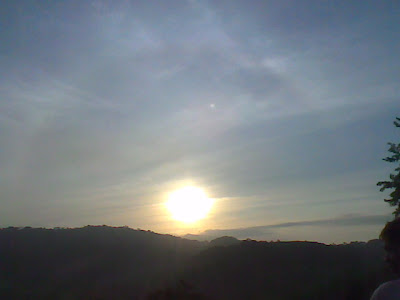 The Earth falls toward the massive star at the very centre of its solar system, while its speed attempts to fling it back into the cold void of space. But it can neither fall nor flee, locked for eternity in an endless struggle between these massive forces, it traces an uneasy ellipse around the sun. 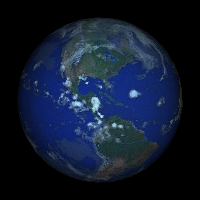 The imperfect planet wobbles around an imaginary line passing through its poles, its axis. This line forms an angle, a tilt, of 23.4° with the perpendicular to the orbit of the Earth around the Sun.

Causing the seasons to change.

Now plunging the Northern Hemisphere of the planet into the dark cold of winter. The meteorological forces of the planet react to the change, raising massive storms, as cold winds from the north roar across the planet's surface, ripping and tearing their way south.

The trees cling to the earth, bending with the storms, giving up the beauty of the fall leaves as they struggle to survive the seasons change.

But not all are able. 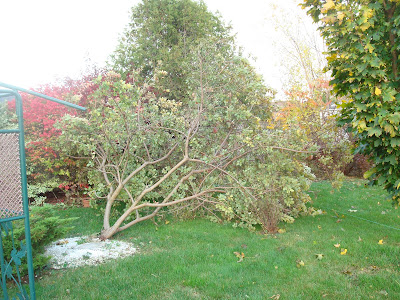 Our smoke bush that stands beside the gazebo at the end of our yard, giving us its shade in the early fall and its beauty in the spring, has fallen. The victim of an individual weakness and cosmic forces far beyond its control. 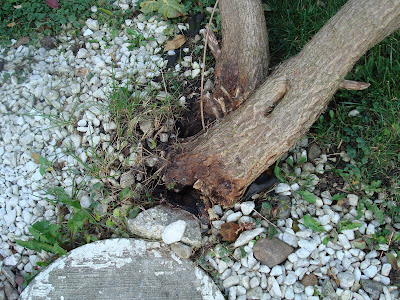 There was a weakness where trunk became root. As the strong Fall winds tore around it, pushing relentlessly against its leafy canopy, it snapped and fell.

Taking with it one of the centre pieces of our garden. Its unique smokey seeds that brought visitors to a halt and made them gasp in wonder, will be no more. 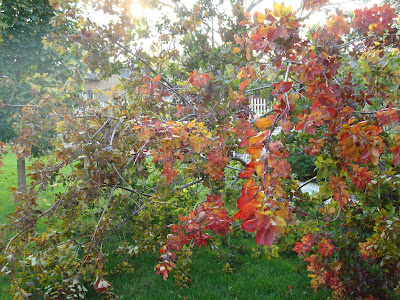 It will now be cut into manageable pieces and replaced with a new tree, perhaps even another smoke bush. But it will be years before balance is restored to the garden and all is put right again.

The cosmos has spoken, the wheel of life has turned, the world is alive with forces beyond our control. And the best we can do is go with the flow, bend when the forces exceed our resistance, survive, and go on.