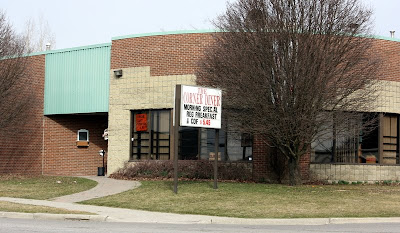 It was Saturday morning and my brother and I had stopped for breakfast at a small restaurant on the edge of an industrial estate. It was a clean and efficient place, open only for breakfast and lunch. The waitress was good humoured and the food was fresh and well prepared.

"Did I tell you what happened to those friends of ours from the west end, the day of mom's funeral?" Keith asked me, as the waitress poured our coffee.

We had just cleaned out the last of the furniture in mom's apartment and with her belongings sitting in the U Haul in the parking lot outside the restaurant, she was fresh on our minds.

"His mother lives here in the east end of the City. They usually visit her every two weeks and decided to drop in since they were already out here for our mom's funeral. But the door was locked when they got to his mom's place. They waited for a bit and then drove over to the nearby plaza where she shops. But there was no sign of her. They asked some of the neighbours but no one had seen her for a couple of days.

"By this time they were getting worried. So he drove back home and picked up a spare set of keys to his mom's place. It must have taken two hours to get to the west end and back. They had thought of calling the police but there were a hundred other places she could be and they weren't that worried cause his mom was in pretty good health.

"Anyway, they get inside and there's no sign of her down stairs. But when they go up to the bedroom, there she is. She's had a stroke and is barely responsive."

"Oh yeh, she was alive. They called 911, got her to the hospital and she's doing okay physically. They're not sure how much damage may have been done cognitively.

"But the thing is, if our mom hadn't died, they wouldn't have been out here in the east end and they wouldn't have gone to visit his mother that day and she would have died. So, even though our mom was dead, she saved a woman's life."

I took a bite of the cantaloupe on my plate.

And thought about what a truly strange world this is.