What America Needs Most 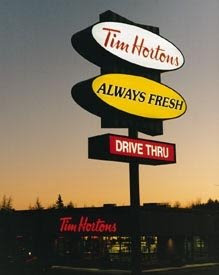 Americans don't know it, but they are a country in need. Oh, of course they are the most powerful and affluent country in the world, but that doesn't mean they have everything, or enough of everything.

Specifically, and unfortunately, they are in dire need of more coffee shops. Yes coffee shops. It is just not enough that they already have one on each corner (and some times two or more). How do you expect a country to survive when faced with such deprivation?

Besides, how many of those coffee shops are Canadian? Why hardly any!

But never fear, my American friends, Tim Hortons is coming to your rescue (no need to thank us).

Tim Hortons is preparing to test drive a new upscale restaurant format in the United States and broaden its North American product line as part of a three-year expansion plan that will include the opening of about 900 new stores.

Yes, we are about to share our Tims with you. Just mention the sacred name and Canadian eyes light up. How generous can a nation be?

I have to admit, we Canadians are not known for romance. If someone were to ask you to name the most romantic people on earth, Canadians would not immediately come to mind. Might not even make it onto your list as a postscript.

"Nice people" yes we would be near the top of your list. "Polite", "clean", "nice neighbours", okay you got us.

If you're ever in a fight, a couple of our hockey players would be handy to have around. But women seldom dream of toothless lovers.

If you need comedians for the Hollywood grist mill, Jim Carey, Martin Short or Mike Myers will do just fine. They'd be fun to have at a party, but they're not romantic. Oh Hollywood did its best to make us romantic, with those singing Mounty/beautiful Indian maiden movies back in the thirties. But the Canadian Mounted Police don't dress in those red surge jackets any more, they don't ride horses and they sure don't sing. If you get stopped for a ticket in Alberta, they'll look like any other cop in North America. And the same old, same old isn't romantic.

That's what makes it so strange that the entire population of Canada should have fallen in love, deeply passionately in love. We stand in the freezing cold just for a glimpse, a taste, of the ardour of our affection. This is more than love. This is romance on a grand scale.

With a chain of donut restaurants.

Cue Enya, dim the lights, we are about to name the object of our affection: Tim Hortons

Just listen to what Wikipeadia has to say:

"Tim Hortons franchise stores are plentiful in Canadian cities and towns. As of July 1, 2007, there were 2,733 outlets in Canada, 345 outlets in the United States and one outlet just outside Kandahar, Afghanistan. Tim Hortons has supplanted McDonald's as Canada's largest food service operator; it has nearly twice as many Canadian outlets as McDonald's, and its system-wide sales surpassed those of McDonald's Canadian operations in 2002. The chain accounted for 22.6% of all fast food industry revenues in Canada in 2005. Tim Hortons commands 76% of the Canadian market for baked goods (based on the number of customers served) and holds 62% of the Canadian coffee market (compared to Starbucks, in the number two position, at 7%)."

Have sweeter words ever been spoken? Can you not feel our hearts beating. Our soldiers in Afghanistan could not exist without Tim Hortons and our troops wrote enough pleading letters to the restaurant chain that they opened a store on our military base in Kandahar province.

And Tim Horton, the man for whom the entire chain is named, was a hockey player.

If you want to find romance in Canada, just go to any Tims and look for the line-up that stretches from the counter out the door into the cold frigid morning.

We are not afraid to suffer for our love. And, it seems, we are also not afraid to share it with our friends. You've outgrown us Tim, and now we must share you with the world (sob).

Have pity on us, we're Canadians.

And enjoy your Tim Hortons coffee when a store opens next to you.