Lindsay Has Her Say

I'm taking a break from blogging over Christmas, so I have asked Lindsay to write today's blog. Any complaints about the contents of the blog will have to be taken up with her. 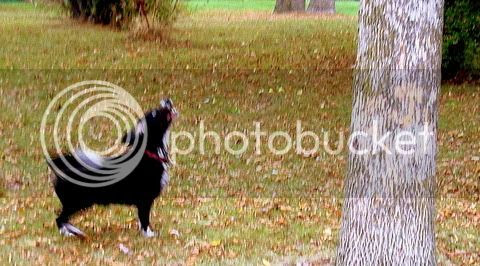 I am quivering with excitement but stand still despite the overwhelming urge to run. I feel Barry's hands on my collar and hear the click of my leash being removed.

I leap forward into a wondrous world of exotic smells and tiny scurrying creatures. For a while I just run for the sheer pleasure of it. But within moments I feel the prideful leash of the pack and return to my pack leader who lumbers down the path toward me.

He is a strange pack leader, huge in size and with a quiet bark. He seldom runs, although lately he has been racing for short distances. His running thrills me. I am so happy for him and excited to be running beside him. But it doesn't last long before he returns to his slow gait.

I come to a fork in the path ahead of us. To the right takes us along the top of the bluffs, to the left the beach at the bottom. I head left, loving the water, drawn by the seductive sound of the waves.

Looking back to check with the pack leader that I have made the correct choice, I see from a wave of Barry's hand that we are going right today. So I spin about and fly up the path that leads to the meadow at the top of the bluffs.

I love hand gestures, they are so much easier to understand than the various barks Barry prefers for communication. "Sit", "lie down" and "roll over" were child's play of my youth, useful only as keys to recognizing that our pack uses barking as speech. Why we don't just use body language is beyond me and has made life in the pack difficult.

I am a dog in a human pack and have to learn its ways. So I listen. Laying on the floor of the livingroom, I listen to all that is being said. I have learned all their names and the names of each area of the house. An obedient pack member, I will go to sleep if asked. No matter how excited I am, if told to be patient, I will go away and give them ten minutes. I know the word "No".

My pack leader often boasts to friends about how much he has taught me, but he stopped teaching me with "sit". The rest I have learned on my own. I have not just learned a foreign language, I have learned the language of a foreign species. But he gets all the praise which, as pack leader, he should.

I catch the faint scent of mouse in passing and wheel back to investigate. Barry passes me by. He seldom chases the spoor of animals, preferring a steady gait down the trail. I head off the pathway into the deep brush, nose to the ground, following the scent.

Eventually I loose the spoor. It was hours old anyway, and I return to the path and find Barry sitting on a log overlooking the bluffs, taking in the view and thinking.

I seldom think. Using language is hard work and I don't really see the benefit. For example, I'm puzzled that whenever we come here to hunt, we never catch anything. Yet Barry is a great provider, as a pack leader has to be. He hunts on his own and comes home laden with foods of all kinds. But where's the benefit to my worrying about it?

A squirrel darts across the path and I am off after it, barking furiously. It reaches a tree, its tail inches from my jaws. Frustrated I dance around the base of the tree, barking and barking with frustration.

The sound of my name being called eventually penetrates my rage and I look up to find Barry already moving off back down the trail. I give a few parting barks and then run to catch up.

I know we're heading home but I love it here and don't know why we can't just live here, find a den that's closer. it would be much more fun.

Ah well, I'm not the pack leader and, although this is a very small and strange pack, its a good life.