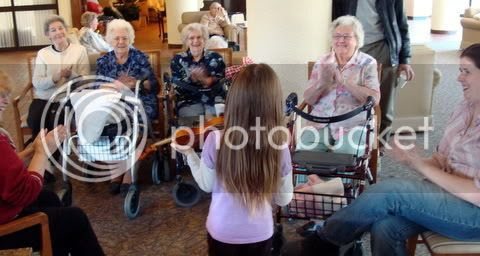 They are not meant to be encountered in their hundreds. Nature intended them to be parceled out among us, secure in the bosom of their family, playing their appointed role in the running of the home and the raising of the children.

They are the menders of the torn clothes and bumped heads, the solace for wounded souls and the moral check on our wilder intentions. They are the embodiment of the previous generation against whom we test our metal and our ideas. Against whom we rebel. And love.

The encounter with them is intended to be personal and individual. Meaningful in other words.

But today winter has returned and Linda and I are spending the day at our respective parent's retirement home. Just us and a hundred or two other people's grandparents. With their decayed bodies, their wrinkled faces, their limited senses, their diapers and wheel chairs and walkers. All telling each other the same stale stores over and over again on an endless loop, when they can talk at all.

At one time the impact was overwhelming on me. I would encounter them in their vast hordes as if viewing creatures from some other planet, with its unusual smells, slurred talk, limited mobility, restricted communication, unpredictable requests. Its ugliness. Its landscape foreign and more than a little threatening.

But I'm used to it now. Comfortable with it, in fact. Although still able to be surprised. Today the dining room only half filled because so many families have remembered and taken their grandparents and great-grandparents out for the day, the Home has arranged its usual Sunday afternoon entertainment.

Today its Martin Wall and I am expecting wave after wave of song from World Wars one and two. The great hall of the retirement home is only half filled and its a tough gig to play. Many of the audience are asleep, heavily medicated or distracted by pain or lack of hearing or sight.

But Wall proves not to be a singer. Instead he is an unusually talented musician. He blends Tchaikovsky with Gershwin, Beatles with Simon and Garfunkel, bounces from electronic key board to grand piano. He doesn't play down to them. Instead he raises them up.

He launches into the theme from Monty Python and the crowd is clapping in time. No one is sleeping now. No one is in pain. No one is elderly or infirm. Suddenly they are young again. And happy.

It is nearly Christmas. They have all survived another year, this crowd of tough survivors, these wounded heroes in the battle against age, that implacable enemy.

For an hour the world is set right and the future holds promise of joy. Or at least just promise.

There is magic in music and we felt its power today.