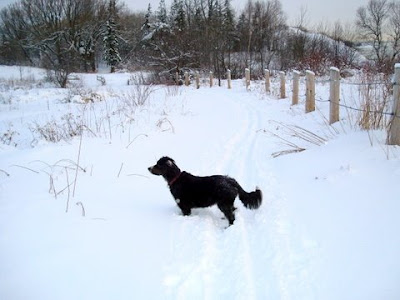 In the beginning came the snow. It fell upon the earth in great fluffy flakes and settled soft upon the land until the land was filled unto the horizon, several feet in depth.

And it was good.

Then came an explorer. See his great six foot frame drive massive winter boots deep into the snowy banks, his faithful black spaniel prancing through the depths with tail wagging glee. He trod a trail he knows to be there but can no longer be seen.

And it was also good.

Behind him, over the passing days, come others. The great and the small, the young and the old, the female and the male, the races of man untold. And their dogs. Each leaving upon the virgin snows the imprint of their passing.

And God cast upon the land a deep and abiding cold, freezing the imprint of the passing multitudes, like memories of the past encased in cement.

And now comes an explorer once more, his dog flying across the slippery uneven pathway like a breeze across the water. But the explorer trudges on, eyes forever locked at his feet, seeking safe refuge for the next step in his progress. He looks not up at the glory that surrounds him. The sky is a brilliant blue, the great lake washes the shore the sun dancing upon its waters, graceful birds glide and swoop over head. He sees it not. He sees, instead, a three foot section of frozen pathway and the ruts left therein by the passing multitude. That is all that he sees.

And it is good.

He will not break a leg this day. His body will benefit from the exertion and his dog will love him the more. His soul, however, will be left to seek its nourishment some other day.