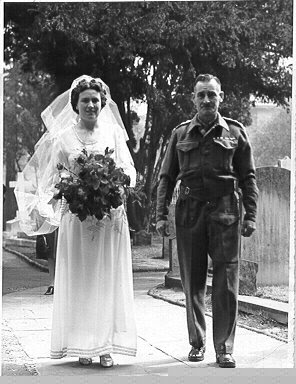 The dark waters of the mid Atlantic were heavy, cold and eerily calm. Stories of icebergs had circulated and memories of the Titanic were still fresh. A light fog lay wrath-like on the waters.

It was a day out of Liverpool, in late May 1946, on the North Atlantic run and the huge grey ghost sliced the waters with calm assurance. The Queen Mary was still painted her wartime colors, was still stripped of most of her finery but her decks held a precious cargo.

For years now she had carried men, grim soldiers in battle gear, over 8,000,000 of them, 16,000 at a time, many going to their deaths on the bloody battlefields of Europe. But today she was on a return journey, her decks alive with women and their very young children. War brides on their way to a new future on a new continent. Hope and joy replaced fear and determination as emotional cargo.

My mother and I were among them. I was three years old and had just had my first train ride, from Mitcham to Southhampton, and was now settling into life on board the second largest ship in the world.

There were children everywhere and every woman had a story of romance to tell, swept off their feet by brave young men in uniform on their way to an uncertain fate. The men these women had chosen had survived the nightmare of battle and had returned to North American to prepare homes for them in a new world.

For every woman on board, this was the adventure of a life time and no small testimony to their own courage.

It came out of the fog, a towering island of ice far to starboard. Women grabbed their children and ran, anxious not to miss seeing the fleeting drama of an iceberg at sea. My mother lifted me onto the rail for a better glimpse as other mothers were doing, her strong arms holding me tight.

Many of these young women had been children themselves when a berg such as this had sent the Titanic to bottom of the ocean and the memory sent a delicious chill through the crowd.

Suddenly, the ships fog horn sent an ear-splitting blast of noise into the air.

Women screamed and lost their tight clutches on their children and we tottered on the rail three stores over the icy waters of the North Atlantic. There was an instant of panic before grips were reestablished and terrified women hauled their children off the ships rails.

And then everyone laughed with relief.

Someone noticed the iceberg had already drifted out of sight as the great engines of the Queen Mary drove the ship toward the distant shore.

My closest encounters with death were all before I was three years of age. The first when illness led the doctors to contemplate an abortion to save my mother's life, the second when shrapnel from an exploding V1 rocket ripped the hood of my carriage apart. The third when I was almost dropped into the dark frigid waters of the North Atlantic.

Life has been pretty good since then.