War Brides Part 3 (And A Happy New Year To Everyone!) 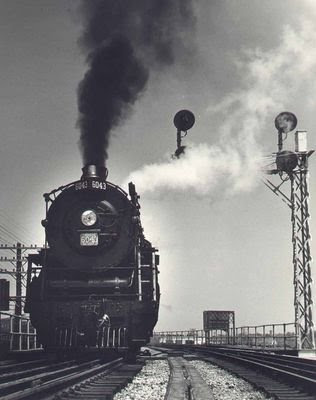 Following a blast from her whistle and a great bellow of steam, her massive pistons began to churn and the long train pulled smoothly away from Pier 21 in Halifax. The war brides crowded the windows for a last glimpse of the Queen Mary, her superstructure clearly towering over the buildings at the pier.

On board that great ship they had enjoyed their first taste of white bread and real butter in over five years. They breakfasted on unrationed food, enjoyed the latest movies and the ship's band. They had been treated to a luxury few thought to see again.

They had been greeted at Pier 21 by a line of mounties in red surge uniforms, a large military band playing patriotic tunes, a crush of reporters and thousands of well wishers all waving the Union Jack.

It was a sweltering day in late May, 1946 and the women were not dressed for the heat. They had come expecting a land of ice and snow. Instead they faced a long slow ride in 80 degree temperatures with no air conditioning. They had as far to go across land as their voyage across the Atlantic.

Along the way crowds gathered beside the tracks to wave and cheer them on.

Periodically the train would stop and small groups of women and children would detrain to the welcoming arms of their husbands and to meet their new families for the first time.

At one crossroads, in an otherwise empty landscape, the train shuttered to a stop and a woman detrained with her young child and luggage; but no one was there to greet her. She sat on her luggage, periodically walking to a curve in the road to get a better view down its length. The train waited a full hour, blowing its whistle periodically, but still no one came and eventually one of the Red Cross volunteers who accompanied the brides came down and rested a hand on her shoulder. The woman got back on board and they continued to Toronto.

My mother often thought of that poor woman through the years, alone in a strange land, isolated among the joyful reunions taking place all around her, everyone on board feeling her embarrassment.

Had her husband mistaken the place, or the date (the train certainly wasn't keeping to any schedule), or had he just been conning her all those years? Everyone on board thinking, could that be me when my turn comes?

The slow and stately journey continued, the train sometimes sitting on a side track for hours to let regularly scheduled trains pass while everyone on board baked in the merciless sun. But at every stop the number of women on board lessened and my mother and I had more room to ourselves and a degree of comfort.

Finally, two days after leaving Halifax, the conductor walked through the carriages announcing Toronto's Union Station was less than half an hour away.

There was a rush for the washrooms and some last minute grooming. The sound of the train's engine began to echo as it pulled into the station. The platforms were empty until the train came to a full stop. Then some women leaped from the train and ran excitedly to the exits.

My mother and I waited for the rush to subside while she gathered our few things together. Then she took my hand and we stepped down from the train and joined the flow of women moving to the exits and down the stairs into the massive hall of the station.

It was chaos. Thousands of people had come out to greet them. Anxious husbands, his parents and other family members had all gathered for a first glimpse of the bride they had heard so much about. Reporters were everywhere snapping photos for the next day's paper.

It had been three years since my mother had seen my father and then he had always been in uniform. The only uniforms here were the police and the Red Cross escorts who had been with the women from the beginning.

It was a shock when she saw him step shyly out from the crowd. At six foot three he towered over everyone near him, dressed in sports coat and cloth cap. He pulled off his cap and twisted it anxiously. And smiled a big grin of pure delight.

I held back, frightened by the noise and the crowd, but my mother suddenly rushed forward pulling me until I had to run to keep up, letting go of my hand only at the last minute as she ran into his embrace.

I stood there, uncertain what to do.

Then a short lady in a polka dot dress bent down beside me.

"Hello," she said. "I'm your Aunt Nelly. Welcome to Canada."