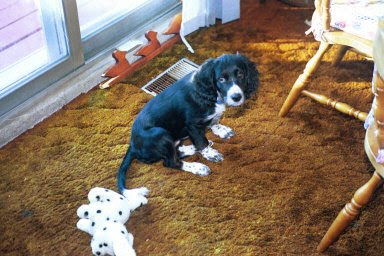 The nice but modest man and the nice but modest woman survived Lindsay's puppyhood. Several pairs of Linda's shoes, a brace of pillows, four of Barry's favourite books, the odd stuffed toy, many pairs of Barry's socks, a couple of figurines, a smattering of reports Linda had written for school and several carpets did not.

But the nice but modest couple put all of this behind them. Lindsay's puppy behaviour was a little extreme, but she was after all a puppy and these things happen.

Then one memorable day Jake arrived.

The home next door to Barry and Linda's was sold and the new neighbours had an old golden retriever named Jake. With whom Lindsay fell passionately in love.

Jake had not been in the backyard of his new home more than ten minutes before Lindsay had discovered a space under the fence and had crawled through to say hello. Although Barry called her, she could not find her way back

So Barry was forced to visit his new neighbours to ask permission to retrieve his dog. Being dog people they understood and Lindsay was retrieved.

Barry found the space under the fence and blocked it with a couple of large stones.

The next day Lindsay found another space. And the day after that.

Barry was running out of things to block spaces he had never noticed before.

The following day the neighbour came knocking on his door.

"You better come and get your dog," the neighbour said, "She's doing to Jake what boy dogs are supposed to do to girl dogs."

Barry hurried to the backyard next door and sure enough found Lindsay firmly attached to the rear end of Jake, a look of wild glee in her little doggy eyes. Jake was politely standing still with a look of profound boredom, mixed with a tinge of embarrassment on his face.

"That ain't natural," the neighbor complained.

Barry took his "unnatural" dog home and the next day he visited Home Depot and returned with a trunk full of 6" X 6" x 10' beams which he proceeded to lay all along the length of his backyard fence, blocking every possible and even impossible space.

Within five minutes Lindsay was next door humping Jake again. She had simply dug a small tunnel under the beams.

Barry returned to Home Depot and purchased a great length of chicken wire. He laid the wire so that it extended four feet away from the fence creating a distance that would make digging a tunnel a logistical impossibility.

Lindsay simply pushed the wire back, dug under the fence and went back to humping Jake.

Barry was finally forced to tie Lindsay to a leash any time she was in the back yard. Where she would immediately tangle herself into a mess and proceed to bark and yawl until the entire neighbourhood was disturbed.

At the end of a year the new neighbours moved taking Jake with them. What role Lindsay had to play in their decision making it is impossible to say. Barry and Linda were simply glad to see them go.

"Just think what it would have been like if she hadn't been spayed," Linda said.

They had survived Lindsay's first and only romance but in the course of that year they had lost some of their modesty.

The rest of their modesty and much of their niceness were soon to be tested.