At An Art Gallery On A Rainy November Day The smokers stood outside in the heavy drizzle, seeking what little shelter they could find. Indian Summer had come to an end and in its place, the cold rains of late Fall had drenched the earth. Cigarettes in hand, the women looked determined, but they didn't look happy.

The parking next to the Gallery was full and we were forced to park the car at St. Joseph's church across the road and run through the puddles to the Gallery entrance. As we passed by them, the two smokers gave us looks of envy as we left the rain behind.

Opening night of the juried art show and the Gallery was full. Tables had been set with food and wine flowed in measured amounts into small plastic glasses.

We looked around for Linda's painting and finally found it toward the back of the gallery, looking quite at home among the other works of art. Her painting of two geese, one with wings outstretched, had taken several months of her time to complete. Many of the paintings had been done by professionals. A picture of a trout about to swallow a lure, was the work of a local artist whose illustrations often appear in Field and Stream.

We were surprised to find so many photographs. Linda had thought all the pictures on display would be paintings. Instead there were a range of photographs, collages, statues and paint. All demonstrating some aspect of "motion", the theme for the show.

A reporter from the local paper wandered the room snapping pictures and trying to avoid bumping into the crew from the television station. 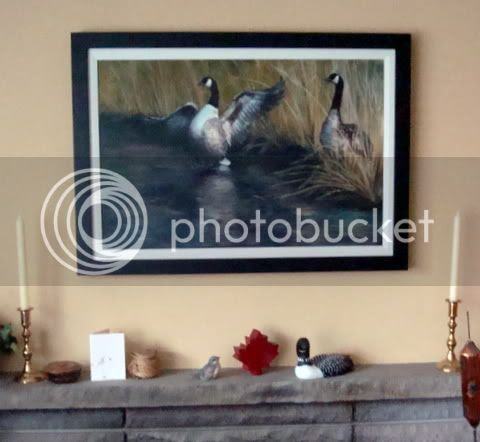 We mingled with the crowd, many of whom seemed to know each other, listening to their conversations:

--"I had a couple of frames left over so I just grabbed a couple of things I'd done earlier, framed them, and brought them in to the show."

--"About half the works submitted to us, never made it into the show. It was a shame but we were overwhelmed and there's only so much room."

--"That picture of the goose flapping its wings, for example." A young bearded man waved a hand dismissively toward Linda's painting. "It's technically excellent but creatively trite. You can buy something comparable at any Wal-Mart for twenty five bucks."

I caught Linda in mid-air as she launched herself at her sanctimonious critic, her nails inches from his jugular vein, her hideous scream shocking the room to silence.

Well, alright, I made that last part up. In reality, she just rolled her eyes in a lady-like way and stuck out her tongue at him behind his back. Causing the reporter, who was just passing by, to choke on his drink. The young critic went on to make loudly dismissive comments about the rest of the works on display before leaving early with his adoring girlfriend.

At 7:30 the judges were introduced and the winners announced. The huge crowd moved back against the walls of the gallery, as far away from the coming judgment of their work as humanly possible. Linda's painting was not one of the top three or even the additional three honorable mentions. But she wasn't disappointed, the quality of work on display was exceptional and her painting clearly belonged in their company.

She got many appreciative comments. We met a lot of people in the local art community.

And I ate a lot of the shrimp ring and managed three of the tiny glasses of wine.

Outside the same three women were still smoking in the rain. Only this time they held little wine glasses.