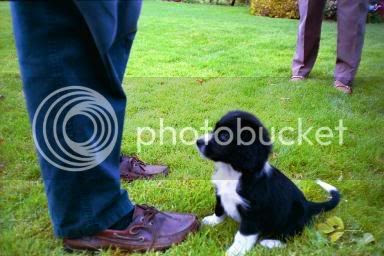 With their daughters gone from the home, the nice but modest couple were feeling lonely.

"Why don't we get a dog?" the woman asked the man one day. "When we got married the first thing we did was get a dog."

"Well, maybe not the first thing, but it was pretty close," agreed the man.

"We've always had an animal around the house," the woman reminded him.

A friend of theirs knew of a breeder who had English Springer Spaniel puppies for sale, so they went one day to have a look. There were five little puppies, four of them a rusty brown colour and one of them black and white.

The four rust coloured puppies were bouncing and playing with each other. The little black puppy was fast asleep.

"The little black puppy is adorable," said the woman.

"Don't let her being asleep fool you," warned the breeder. "That little one's the friskiest of the bunch. She'll be an alpha dog when she grows up."

"We've both had dogs all our lives," the man reassured the breeder. "We're very comfortable with dogs."

"Well then," said the breeder, "Don't say I didn't warn you. Lets go sign the papers and she's yours"

The breeder picked up the little dog and handed him to the man. "She's yours now," he said.

The nice and modest man cuddled the tender little life in his arms and lost his heart to her.

And then she peed on him.

And then puppy bit him on the nose. With razor sharp little puppy teeth.

"Golly, golly, golly!" said the man, or something like that!

And that was how Lindsay came to live with the Barry and Linda.

Before she was done, their lives would be neither nice nor modest ever again.

But they also would never be lonely.