From Tears to Cheers

Now I know what Lindsay feels like when I unclick her leash and she races down the beach glorying in her freedom. We had put the city and its troubles and worries behind us and drove out into the gently rolling farmlands north west of the city of Toronto, the world opening up before us in vistas unfettered by massive buildings. It was nature that was spread before us, not bricks and steel.

True, we were on our way to Jack's funeral, but we had only met him at family gatherings and he wasn't one to talk a lot. He was my son-in-law's grandfather, but he had played a major roll in Jeremy's life. Jeremy's father had been killed in a tragic car accident when Jeremy was 8 and Jack had stepped in to fill an aching void. Jeremy spent every summer on Jack cattle farm. 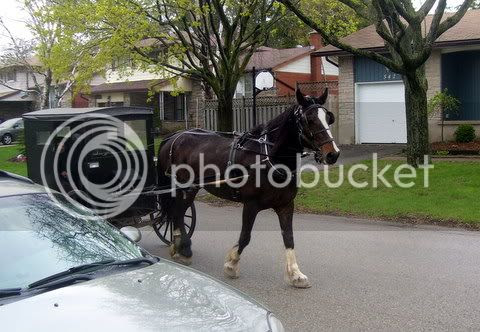 We were heading for Listowel in Mennonite country, their one horse carriages riding the broad earthen shoulders of the highway like ghosts from another time.

All so different from the city.

The funeral was in a small Presbyterian Church in the little farming village of Atwood, just outside Listowel, and the pews were filled to overflowing. We were there to support Heather and Jeremy and to look after our grandchildren should they get restless and not be able to make it through the service. Young Griffin, 5, is notoriously restless and disruptive.

As it turns out, they made it 3/4 of the way through, before Heather gestured to us and we took them down stairs to the play room. Linda sat in the rocking chair with a book and Natasha nestled on her knee and the two of them disappeared into a story. Griffin and I found some wooden blocks and Griffin delighted in building fragile towers and then demolishing them with a plastic truck.

Over and over again, with escalating force.

His initial joy was gradually replaced with destructive anger as the blocks went smashing across the floor. I could see tears in his eyes.

"Are you alright, Griffin?" I asked cuddling him to me.

"Are you okay buddy?"

"My great grandfather died," he told me.

I stroked his hair. "Yes I know, Griffin. That's why everyone is so sad today."

Then he looked up at me as if searching for something important, wet eyes shining intently through long bangs.

Uncomfortable, I forced a smile. "Lets see if we can build a bigger tower, okay Buddy?"

But by then the church service was over and his parents had arrived. The church basement was filled with people and tables of food. The church kitchen staffed by a dozen women, making sandwiches and coffee and busy cleaning up. Farmers stood in their ill fitting Sunday-Go-To-Meeting suits, their broad farmers shoulders pushing at the seams, mud on edges of their boots.

I found Jean, Jack's widow, in the middle of the crowd and gave her a hug of support. She melted into my arms in sudden tears, "Oh Barry," she said, "I was so sorry to hear about you. We can't loose you too."

And suddenly and unexpectedly, this was getting tough. For a moment I couldn't talk.

"Don't worry," I told her and turned the conversation back to Jack and how she was coping with her husband's loss. And then Jeremy was there and took her off to talk with some distant cousins.

All around me, the tables were loaded with sandwiches and pickles and pasties and raw vegetables with dip and cheeses. None which I could eat. And huge urns of coffee, none of which I could drink.

Three hours later we were back in the City, changing for a trip downtown to see the stage production of the Sound of Music at the Princess of Wales theatre.

When we got to the theatre it was packed. The curtain rose and Maria was revealed running up to the peak of "her" mountain, arms outstretched and the hills were suddenly alive and the crowd was lifted up in cheers!

And so were we.