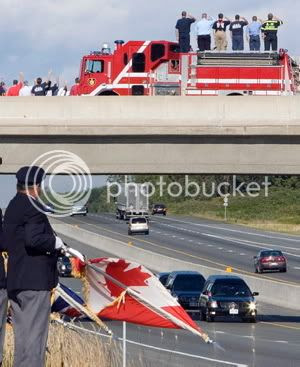 Canada is a country with a small population with a correspondingly small military force. We have about two thousand soldiers in Kandahar province in Afghanistan.

Our losses over the past four years are now 116 men and women. More than that if you count the teachers and humanitarian aid workers who have also been killed.

When our losses are in this range it allows us to do something that is unfortunately special: honour our dead as individuals. We see their faces on the National News, we learn their background, we hear of the pride their stricken families hold for them.

When a soldier is killed and the family notified, the media cover the ceremony in Kandahar. We see the tears on the faces of their comrades as they struggle with the weight of their coffin, carrying it toward the giant military plane that will fly them home.

All of the fallen soldiers are flown into Trenton Military base, just outside Kingston Ontario. They are then transported to Toronto for autopsy before being returned to their families.

This requires transporting them along a 100 kilometer stretch of Highway 401.

Because we get to know of these men and women in a very personal way, something extraordinary has begun to happen. On bridge after bridge across the 401, crowds of people have begun to spontaneously gather on the highway overpasses to applaud their final passing. This stretch of the highway has now been renamed the Highway of Heroes.

Four Canadian soldiers, popular with their comrades who described them as "unsung heroes," were killed yesterday in two separate bombings in southern Afghanistan. At least eight other soldiers were injured in the two attacks outside of Kandahar city.

Master Cpl. Scott Vernelli and Cpl. Tyler Crooks -- both of November Company, 3rd Battalion, Royal Canadian Regiment -- died in an explosion at about 6:45 a.m. local time in the Zhari district west of the city.

On Saturday night last Fall, after Sapper Stephan Stock, Cpl. Dustin Wasden and Sgt. Shawn Eades died when a roadside bomb exploded outside their armoured vehicle, Linda and I went to the 401 overpass on Conlans Road around 7 pm. A small group of people had already gathered, most wearing red maple leaf t shirts the colour of our flag.

Half an hour later members of the local legion arrived with flags. Twenty of these on tall aluminum poles were handed out to members of the crowd. Linda and I each took one.

As we waited on the bridge, the cars and trucks streaming below us on the 12 lanes of the 401 flashed their lights and beeped their horns. People even leaned out their windows and waved their support as they passed under us.

We had a long wait. It grew dark but the evening was a very pleasant temperature. As the evening wore on the crowd continued to grow until over one hundred people lined the bridge, as they were lining most of the bridges along this hundred kilometer stretch of highway. Around 9 o'clock the traffic on the highway suddenly stopped and the road emptied. In the distance we could see blue lights coming over the horizon.

We raised our flags on their tall aluminum poles as a large police motorcyle escort approached accompanied by three black hearses. The motorcycles sounded their sirens and the crowd who were not holding flags broke into loud applause.

Then the small cavalcade swept beneath us and was gone. The highway filled once more with traffic.

The flags were packed away with respect. The crowd began moving off.