Can You Say Dexamethasone 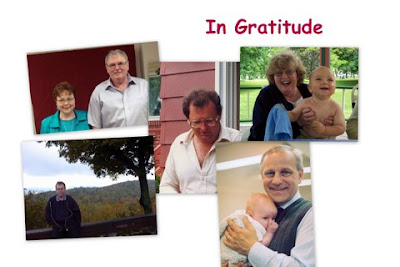 There comes a time in the life of any blogger who is facing a protracted and serious illness that he write about the unexpected and life transforming gifts that illness has brought his way. No matter how much that illness has taken and will take, it has also improved the quality of his life in ways that would not have been possible without the illness.

An exercise in gratitude toward a monster.

I wanted to thank those pictured in the collage above who took the time and trouble and expense to act as my companions and drivers on my daily trips back and forth to Princess Margaret Hospital. Who put up with my numbing silence broken only by urgent requests to pull the car over to the verge. Quickly!

I wanted to thank all the commenters on this blog for their love and support. For their graceful words and prayers. For hanging in there with me on this terrible journey. Without this illness I would never have come to know you or the depth of your love and wisdom. Your compassion and your generosity.

I wanted to thank my work for their flowers and cards and frequent expressions of concern. For their genuine shock at discovering I was facing this crisis and for shouldering the burdens of the work I wasn't able to finish.

I wanted to thank my family for their cards and their visits and their phonecalls and their concern and their love. I know it has been as hard on you as it has on me.

I wanted to thank Linda who put her work aside and took on this burden with me. Whose love and patience and grace under fire have been extraordinary. Who lifted at least half this burden from my shoulders and took it upon her own. I've gone from her hunk to her shrunk but I've never had to be her shrink, although she'd been called upon to be mine.

I wanted to talk about the things I've learned about what matters most in life, about the importance of diet and exercise and meditation. About taking time to take care of yourself.

I wanted to thank Lindsay for her concern despite her being suspect in the Great Earth Box Caper. She got me out and walking nearly every day. And when I just couldn't she never complained.

I wanted to thank my doctors for Dexamethasone, a steroid that has brought food and drink and energy back into my life.

I wanted to do all of these things.

But I won't. Because I'm pissed. Pissed off at science.

One of the things I was grateful to this illness for was a return to the weight I carried at age twenty. I've lost 40 pounds since last March. If you didn't know I had cancer you'd think I just spent a year at a health spa. I've lost so much weight I no longer have hypertension. I have the blood pressure of an Olympic Athlete.

But then on the weekend I read the latest research on weight and longevity. "Fat People Live Longer", the new study showed. "Health experts have long warned of the risk of obesity, but a new Japanese study warns that being very skinny is even more dangerous, and that slightly chubby people live longer.

"People who are a little overweight at age 40 live six to seven years longer than very thin people, whose average life expectancy was shorter by some five years than that of obese people, the study found."

I mean, come on, how cruel is that?