The End At Last 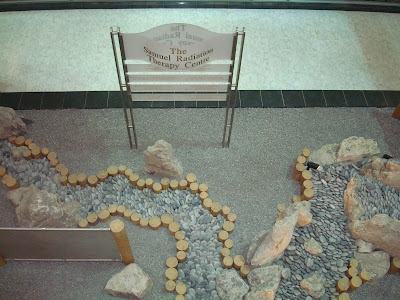 Suddenly traffic has come to a halt. We'd been making good time through surprisingly light traffic on our way to my last appointment with the radiation oncologist when things ground to a halt at Danforth and St. Clair.

Although we were high up in my daughter Kathy's Grand Caravan, we couldn't see past the 18 wheeler in front of us. But we could see the reflection of the flashing lights of the Emergency Services Vehicles ahead.

"Sure looks like it," agreed Kathy. "Let's hope they get things moving soon."

"Kathy, since we're stuck here anyway, tell your dad that story about Tim's last ball game," Linda suggested from the back seat.

Kathy brightened, "Oh you should have been there, it was amazing. Like something out of a movie. They have pitching machines this year that fire a perfect pitch for 8 year olds. Unfortunately, in the first game of the season, the boy ahead of Tim got hit on the head with the pitch and that terrified Tim. For the rest of the year he would shy away from the ball. The coaches were amazing, they were patient and constantly supported him, but he just wouldn't step up and swing.

"Until last night. He actually swung at the ball and got a hit. But then he was so surprised he just stood there, with everyone yelling 'Run Tim, run!' Which he finally did, with everyone on both teams, including the parents, cheering for him.

"Then the next batter got a hit to move him to second and then third. When the next batter came up everyone was yelling 'You've got to hit Tim home!' They didn't care about the guy getting a hit, they just wanted Tim to get home. And when the boy did hit the ball and Tim made it to home plate, everyone at the game rushed onto the field. The kids on both teams were yelling and hopping and screaming. You'd think they'd all just won the world series."

"Oh geez, I wish I'd been there for that! What a moment for Tim!"

Ahead of us, the traffic began to move again.

"At bed time that night," Kathy laughed, "He told me, he might want to get another hit next time."

And suddenly we were through the intersection, past the fender bender, and back on our way to PMH.

At the hospital I was weighed in (78.9 kilos [174 lbs], down 3 from last time) and taken to the Examining Room to wait for the oncologist. Hopefully for the last time. After two hydrations and a concerted effort to keep my liquid intake up, I was hoping she wouldn't send me for still another two hour hydration.

Linda had been tracking my liquid intake throughout the previous day and gave the list to the doctor when she arrived. Adding up the various drinks she decided I'd had about a litre and a half of liquid.

"Not quite good enough," she said. You need two litres at a minimum. But I don't think we need to do another hydration. Just remember to drink more.

"You have a CT scan scheduled for the 7th and you're seeing the medical oncologist on the 16th, so I think we need to book another follow up for the 20th, here in radiology. If all goes well, we will turn you over to the surgeon to schedule your operation, fairly soon after that. We can't wait much more than 8 weeks before surgery because the scaring from the radiation will start to become rigid and it will make surgery more difficult."

"So, are we likely to see much change in the CT scan?" I asked.

"No, it's not likely we'll see any. Even if the radiation and chemo has killed all the cancer, it takes the body a long time to get rid of the residue. It might be months before we can say we've got it all. But, of course, in your case, where you're having your esophagus removed, we can do a biopsy much sooner. And, needless to say, can do a much more complete biopsy."

"But for now," she smiled, "You're free to go. Free to forget about us for a few weeks. You've done extremely well and I'm very happy."

I thanked her for her kindness, as did Linda.

And we walked back to Kathy's mini van feeling a little anticlimactic, after five weeks of almost constant pain and struggle. Where was my cheering team surging onto the field? I guess, as adults, we are above that sort of display. That only happened for kids, or in the movies. Was I expecting the crowds in the hospital lobby to break into a spontaneous Bollywood dance number?

In the van, Linda said "Barry!"

I turned around to look at her, smiling, her hand held flat toward me for a high-five!

We slapped hands, and suddenly the world felt right again.