The bush plane roared across the lake, its pontoons cleaving the surface of the water leaving long liquid rails behind it, as it raced toward the house boat that was lumbering into its path and beyond that the restaurant patio where I was choking on a mouthful of spaghetti.

Linda's back was turned toward the drama unfolding behind her as she sought to reassure the concerned waitress that I was alright and my distress had nothing to do with the quality of the food.

The second day of our vacation had begun calmly enough. I had gone for a walk along the river behind the Inn and paused to watch a group of people performing Tai Chi beneath the trees on the river bank. There was a peace to the world that morning and a real sense of having left our stresses behind in the city. As I watched the graceful movements of the small group, I thought about the promise of the day. We were driving to the village of Lakefield, then the hamlet of Ennismore, where Linda spent many of her summers as a child, before we stopped for lunch at Buckhorn. 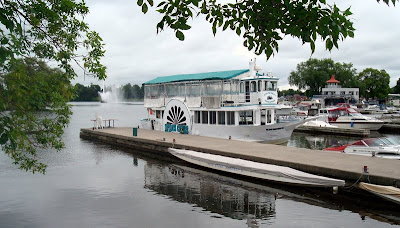 The afternoon would include a visit to the Ojibwa Arts Centre and Museum at the Curve Lake Reservation. Lots to see, lots to do. A day stretching before me of promise and adventure. But in the cool pre-breakfast morning, there was no need to hurry, I could just walk along the river bank, past the marina, past the stage where the Lovin' Spoonful had performed the night before, through the trees and the quiet of the day.

Eventually I reached a point where I had to choose whether to walk on further or turn back. I paused in the midst of temptation, took a deep breath and then turned back. And the day began. 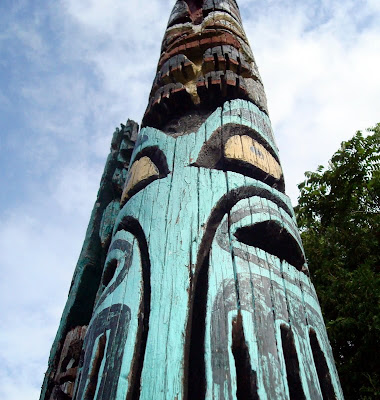 The Village of Lakefield is probably best known for its world class private school where Prince Andrew spent his youth. A beautiful little town, where we found a wonderful Fine Book Store housed in a disused Railway Station. Linda found a stack full of books that interested her and I discovered a biography of one of our neighbors, Doris McCarthy one of the last of the Group of Seven painters.

We also discovered a chocolate store where we couldn't resist purchasing a couple of freshly made truffles, to ward off any chance of starvation between breakfast and lunch. 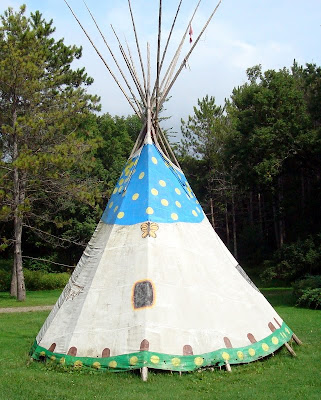 Then it was on to Buckhorn for lunch, where we sat on the patio and watched the houseboats passing by. I ordered spaghetti because I had some trouble swallowing at breakfast and the rest of the items on the restaurant's menu looked more challenging.

However, even the spaghetti proved too much for me, and several mouthfuls stacked up behind the inflammation in my throat and all I could do was sit and hope they would eventually find their way past the blockage to my stomach. And tolerate the intense pain of their passing.

So I sat watching my meal get cold while the waitress entered into concerned conversation with Linda over the quality of the meal and Linda tried to reassure her the problem was mine and had nothing to do with the food. 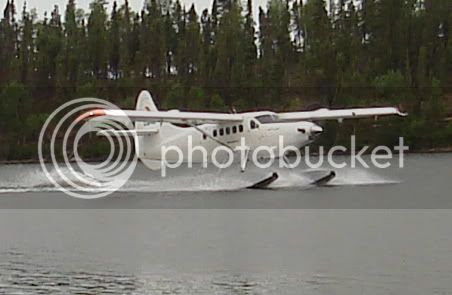 And that's when I saw the houseboat lumbering into the path of the bush plane that was streaming across the water toward us attempting a takeoff. I started waving excitedly which made Linda and the waitress wonder if I was in increasing distress. Was my throat now blocked and was I unable to breathe?

No we were about to witness a plane crash into a houseboat or careen off the houseboat and crash into the patio joining us for lunch. I waved some more. And the waitress got even more excited. We were attracting the notice of people at other tables.

Finally they turned in the direction I was pointing, just as the bush plane lifted off the lake and soared overhead missing the roof of the houseboat by several meters. No big deal. The same plane took off several times a day. The women looked back at me as if to say, so what? 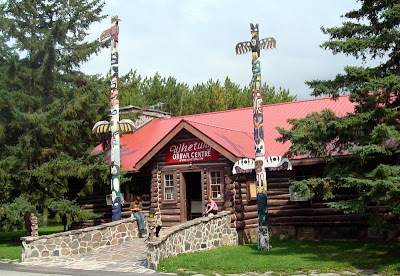 I discovered, in the excitement, my throat had cleared and I was able to eat again. Although by now the spaghetti was cool. The story of my recent life.

We spent the afternoon at the Art shop on the Curved Lake Reserv where I was tempted to spend a lot more than we had brought with us, before heading back to the Inn for the evening.

And the end of the second day of our vacation.