Because My Life Lacks Sufficient Drama 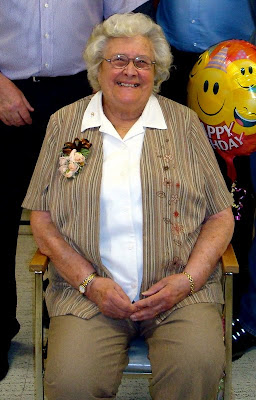 This wasn't how I'd planned to spend Valentine's day.

Linda and I had taken our daughters and their families out for dinner the night before and had a quiet Valentine's Day planned for ourselves.

We exchanged cards and gifts in the morning, did a little blogging, read for a while and were discussing where to go for dinner when the phone rang.

Although Linda answered, I knew right away it wasn't a typical call. Phone calls from our family and friends now follow a new protocol. People no longer say "Hello how are you?" Instead they say, "Hello how is Barry?" and Linda spends five minutes giving them an update on my condition.

But this person wasn't interested in me and Linda was saying things like, "Oh my gosh, how is she?" and "When did it happen?" and "Where did they take her?"

It was my brother Keith calling about my 90 year old mother. She'd had a series of falls in her senior's residence that morning and they had sent her to the ER at Centenary Hospital. My brother's wife is a Registered Nurse and is the Residence's contact person for medical issues. Keith and Lynda were on their way over to the hospital and would phone when they arrived.

And so we waited for their phone call.

Which eventually came. My mother had a number of bruises from the falls and was somewhat disoriented and dehydrated. She was still waiting for a doctor to examine her. She had been sent to the hospital without her glasses and was asking for them. Could I go her Residence and pick them up?

Well yes, I could do that.

And that was how I managed to spend most of Valentine's Day at the hospital. By the time I got to the hospital with the glasses, mom had been admitted to the Observation room and had been examined. The doctor had ordered blood work, an electrocardiogram, a chest x-ray (suspecting a chest cold had turning into pneumonia) and a CT scan.

Realizing it was going to be a long haul, Keith and Lynda went home for a while and came back to relieve me at seven o'clock.

I got text messages from Keith up to midnight. The CT and X rays weren't completed until 9 oclock and from then until 12 they were waiting for the doctor to read the results and give them some feed back.

Lord knows what time Keith and Lynda finally got home but it would have been late. Very late. It isn't 8 am yet so still a little early to call them. Although the news couldn't have been too dramatic or they would have phoned no matter the time.

Today, in Ontario, it's Family Day, our new Provincial holiday. A way to break up the vast distance between Christmas and Easter. I suspect I'll be seeing a lot of my family today.

The photo above was taken last year on my mother's 90th Birthday. She will be 91 on February 27th.