Each week we are following the lives of members of the Fraser Family as they appear in this 1890 family portrait. Last week we focused on William (back row far left) and this week we look at his youngest sister Theresa, standing beside him in the pretty dress . 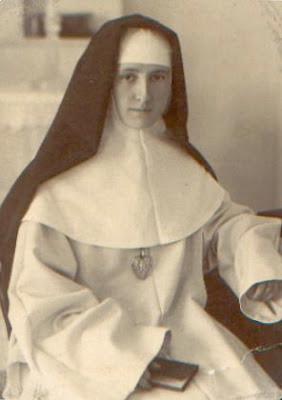 You are one of only two members of this family that I knew in person.

And I hated you.

Well, perhaps it wasn't you I hated exactly. I had nothing against you personally. I just hated visiting you.

Once every month or so my father would force us to get dressed in suits and ties and drove us to the convent where you lived your life behind closed doors. We were admitted to a visitor's room where we sat in silence on beautiful but uncomfortable chairs.

As a cloistered nun you were not permitted in the same room as us, but sat in the room next door, opening a small partition for us to communicate.

You gave my four brother's and I hard candy to suck on, one piece each, as if they were precious jewels. And you were old, so old and delicate.

What I remember most about you was how your lower lip always used to be so wet it glistened.

Teresa followed the example of her older sister Annie, and entered the religious life by joining the Convent of the Good Shepherd at 17 years of age, receiving the Habit on August 5, 1893 and being professed on August 8, 1895, taking the religious name of Sister St. John.

Teresa's older brother William was a carpenter who was hired to do some necessary work around the convent. So touched was he by the peace and tranquility of his sister's new life, that he left shortly after to become a Trappist monk himself.

Perhaps I could have tolerated my visits more, or even enjoyed them, if I'd known that she had not always been a cloistered nun and had once lived a much more adventurous, and even downright dangerous, life.

In 1900 she was one of a band of five missionaries chosen for work in Mexico. Here she learned the Spanish she was fluent in for the rest of her life. After nearly a decade at this work, she was forced to make a dramatic escape, fleeing for her life to the United States at the start of the Mexican revolution in 1910. At the U.S. Mexican border she was forced to disguise herself in secular dress and to wear makeup for the first time.

But, when I knew her, this was ancient history to her and not something she ever spoke about.

After she returned to Toronto, Sister St. John was named Mistress of the Magdalens. According to the Archivist of the Convent, "Her exuberant nature soon won the hearts of her charges and for thirteen years or so, she guided, directed, and consoled these dear souls through their many trials, temptations and difficulties, celebrating her Silver Jubilee with them."

She was named Mistress of Novices in 1932. Again, according to the Archivist, "She had great love and zeal for the Missions and inculcated this missionary spirit in her Novices. Naturally enough, her predilection was for the Scarborough Foreign Mission Society her younger brother John had founded, and as she became acquainted with the young Seminarians, through her Priestly brother's petitions for prayers for their perseverance, she would designate a certain Seminarian to each Novice to keep under her spiritual wing."

Playing religious matchmaker from the tranquility of her convent.

Like her older sister Johanna, she was a skilled artist but water colour, not oil was her preferred medium. Her beautiful floral borders grace some of her sister poems.

In 1940, at age 65, Sister St. John was retired from her charges and turned to Sacristy work in the laundry, mending, pleating and folding Sacristy Linens until eight months before her death at 86 years of age, after a lengthy illness.

Over 14 priests served at her funeral including her nephew, Bishop Francis Carroll, of Calgary, R.S. Diemert, the Superior General of the Scarborough Foreign Missions and P. McGovern, the Auxiliary Bishop of Toronto.