Each week we are following the lives of members of my Great Grandfather Fraser's family as they appear in this 1890 family portrait. Last week we focused on Theresa (back row second left) and this week we look at her brother Alexander, standing to her right. 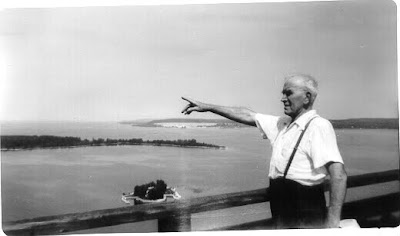 It all looks so easy now, and logical.

But when I first began researching this family I didn't know Alexander existed.

I certainly didn't know he lived in Chicago and had founded a very large branch of the family in the United States.

Alexander, the fifth child of William and Johanna Fraser, was rumoured to have been born on board the ship that brought the family from Scotland to Canada in 1873, at least there is a family story to that effect. However, newly discovered documents firmly place his birth in Portree, on the Isle of Skye, in 1872, the year before the family immigrated to Canada.

In any case, no matter where he was born, once launched, Alexander was a man on the move. After finishing his schooling in Toronto Canada, he became a stone mason who traveled extensively, following job opportunities around Canada and the northern United States. The smoke stacks that once graced the plant on the front of the Shredded Wheat box, were built by him.

Alexander married Ellen Hallett in Toronto and together they had eleven children. 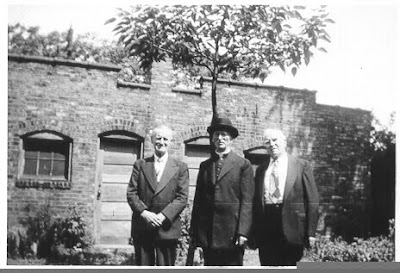 My Grandfather Charles, Msgr John and Alexander at Alexander's home in Chicago

Ellen died at 33 years of age. Alexander's sister Mary Ann (who was already caring for his older sister Isobella's three children after her death just 4 years previous) stepped in to assist with the children.

With work scarce, and having many mouths to feed, Alex followed the job market to Chicago where he eventually met and married Mary Fitzgerald. Alex had not told Mary that he had been married previously and was father of nine living children. Wracked with guilt, when he found work away in Winnipeg he took the opportunity of distance to write to her fully disclosing his past. Mary had him immediately come home and together they caught the first train to Toronto where they gathered all the children and took them back to Chicago with them.

When I eventually connected with this family I discovered, counting in-laws, that Alexander had over 500 descendants throughout the United States from Circus performers to Army Generals.

Francis and Gerald were to play a key role in my unraveling the mystery that was my grandfather Charles, the black sheep of this family. But we will get to Charles story eventually and the key role Alexander played in his life.