The Bell And You 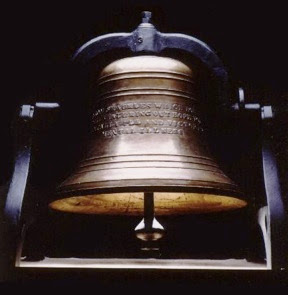 High on the wall next to the exit from the Chemo Day Care Centre at Princess Margaret Hospital a bell is waiting for me. As I mentioned in my post a week ago Friday, there is a ritual at PMH that those patients completing their last treatment of chemotherapy, ring the bell as they leave.

And whenever it rings the nurses and volunteers and other chemo patients pause for a moment and applaud.

When I finish my last injection of chemo, on Thursday February 18th at about 2pm Eastern Standard Time, I'm also ringing that damn bell!

As loud and as long as I can!

My cancer may not be cured. I may find myself back there again sometime, but for now, at least, I'm declaring victory. After all, you don't have to win the whole war before celebrating victory in battle.

When I posted my intention to ring that bell last Friday a number of people told me they would listen for that clang. Bonnie, in Montreal will be listening as will Two Flights Down in Japan. A dozen others have told me they plan to applaud and cheer and dance.

Now if I really hammer that sucker and if things will just quiet down on the 401 corridor between Toronto and Montreal, it is possible Bonnie might hear a triumphant peal just on the edge of audible sound.

And I might just hear the sound of her cheering in return.

But even if we were to shut down the engine of every city between here and the west coast and managed to turn the mighty Pacific Ocean into a mill pond, I can't imagine the ring of that bell making it all the way to Japan.

Fortunately, people have started offering to help, to join in the ringing of bells on the 18th.

Anvilcloud a former teacher will pitch in, as will JarieLyn, and Leslie Avon Miller, JeanetteLS will ring and dance and Delwyn has her donger all ready.

If you'd like to join us in the effort to get the sound of that bell all the way to Japan, just let me know in your comment to this post and I will create a box on the sideboard listing all those who are planning to join in: ring a bell, applaud, cheer, commit to making some kind of joyful noise around 2 pm on Thursday February 18th (Eastern Standard Time)!

Not just for me, but for everyone who has ever struggled against impossible odds and won.

Lets declare a victory on behalf of us all and let the world know it!

Or at least Two Flights Down in Japan!