Patty and Reggie Girl pioneered the Friday Photo Shoot Out asking us to post photos of our local community every Friday. From a handful of participants it has grown into a world wide phenomenon with over 77 contributors. This week's theme, chosen by Si, is INTERESTING OR AMUSING SIGNS.

There are links to many of the Friday Shoot Out participants from literally around the world at the bottom of my right panel. For a comprehensive list and how to join in, see the Official Shootout Blog for more details.

Next weeks theme, suggested by Mary, is Incongruous Stuff. 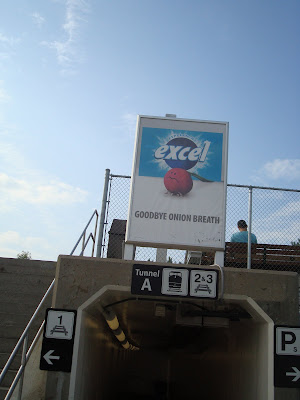 The heat of the day was oppressive, and that was the first sign. The humidity slowed everything down, held every action back, the way the lock on a crossbow held back the bolt but you just knew at some point the trigger was going to be pulled and that bolt was going to fly. 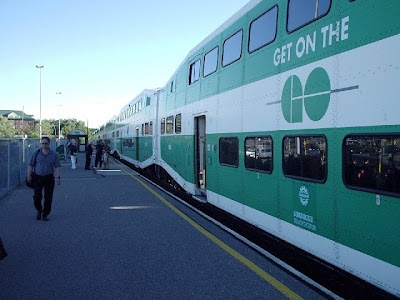 Linda and I caught the 9:10 GO Train into Toronto's Union Station for our 10:30 appointment with the oncologist at Princess Margaret Hospital. We expected to hear the results of Sunday's MRI on my spine and to learn when my CT guided biopsy was to take place.

We were as taunt and high strung as the weather in the wake of the sudden and unexpected death of Mary Knight, a friend and one of Linda's co workers at Berner Trail Public School. Mary was fighting her own battle with cancer, complicated by her diabetes. Despite her own troubles she would phone Linda periodically to see how I was doing.

Mary was very ill, but everyone was still hopeful for her recovery. She was not in crisis and her death was unexpected.

At the hospital the oncologist had still not received the results of the MRI scan so she had no update on my condition. She did, however, have a date for my CT guided biopsy: September 2nd.

But wait a minute, September 2 was the date set for my operation? Yes, unfortunately, my operation was now postponed pending the results of the MRI and especially the biopsy. If the biopsy revealed the cancer in my spine was lymphoma, the operation would be rescheduled for sometime in the middle of September. If it was a metastasizing of my esophageal cancer, well, surgery would not be rescheduled. 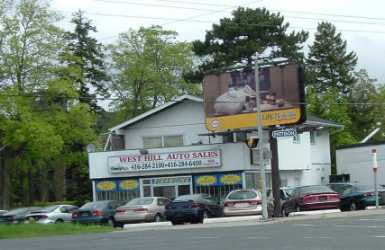 Back at Union Station, waiting for the GO Train home, I got a phone call from my daughter. They had had car troubles and had borrowed my car for a few days. As her husband set out to return the car this morning it had broken down on the 401 and they had had it towed to a dealer in Guelph. The garage would check the car out and call me with an estimate for repairs.

By this time, the signs were adding up. This was not going to be a good day. I suggested to Linda that we head for the bedroom in the basement when we got home, turn off all our phones, and refuse to come out until tomorrow.

But before we could put this superb plan into action, the car repair called to tell me their examination showed the problem to have been a sudden failure of one of the seals on the engine that had caused all the oil to suddenly drain out resulting in the engine seizing. Turning into a solid block with no moving or movable parts.

Cost of installing a new engine would be $3,000. Including taxes, of course. 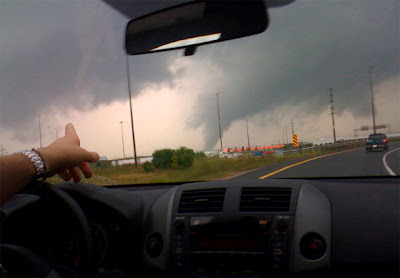 But the day was not finished with us. The final sign came that night. The crossbow bolt that had been held in high tension and ratcheted up through out the day, unleashed in a massive and violent storm. Tornadoes ripped apart homes, topped cars, felled massive trees, flooded roadways, took lives and overwhelmed hospitals. Electricity was cut off to over 100,000 households.

Toronto and its surrounding towns and cities was battered. Then battered again.

Our house shook. Rain hammered against the back of the house like shrapnel. The massive trees in our backyard bent and twisted in agony. We watched the water stream down our front window, lightning flashing all around us and thunder so continuous it seemed to go on forever.

But the trees held. And no damage was done to our property.

As Linda and I watched the evening News in disbelief, watched interviews with people in tears whose homes had been turned to rubble, who were anxiously awaiting word about family members who had been injured and rushed to hospital, I realized the final sign had special meaning.

No matter how bad life got, it could always get worse. Compared to those whose lives were torn apart by the storm, we really had little to complain about.

But now, if you'll excuse me, I think today I'll spend in the spare bedroom in the basement. And don't try calling because I'll have the cell and house phones turned off.