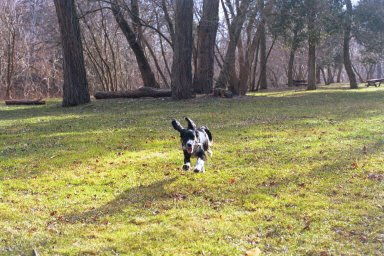 The Park has a sadly neglected look, like a man badly in need of a haircut. The Outside Workers for the City of Toronto have just ended a six week strike and will soon be back grooming the grounds once again. But for now, the grasses and clovers and wild flowers have grown throughout the park in wild abundance.

The sun shines down on the park, a rarity in this cold and rainy summer of 2009. A squirrel stops its constant search for food, its long ears flickering in search of distant sounds. Far away around the bend it catches the first faint echos of human speech. And laughter. And the sound of dogs.

The squirrel does a last reconnaissance and then scampers for the safety of a nearby tree.

Around the bend come the dog walkers. Two women, four men and seven dogs of various breeds. They walk this trail on a daily basis, the humans keeping up a friendly banter while the dogs bask in the exotic fragrances of the outdoors.

Ahead of them, a black waggy tailed dog comes flying over the crest of a low hill and prances through the long grasses toward them.

"Lindsay!" exclaims one of the men, through a thick grey beard. "How are you doing girl, I haven't seen you for a long time!"

Lindsay's entire body is wiggling with excitement and the joy of greeting as she accepts pats from the humans and polite bum sniffs from the pack.

"Where's Barry, girl. Did you loose him?"

And as the humans look back down the trail, they see a hat emerge over the crest of the hill, followed by a head and then the long and lanky build of a tall thin man moving with painful slowness.

"Whoo Hooo", calls one of the women, "Barry you've been loosing some serious weight. You're looking hot man. You're gonna have to give me some tips!"

Barry laughs, "That's okay. How could you know. And anyway, thanks for the compliment."

"Haven't seen you for a while," the heavier of the men comments.

"No, I've just been through chemo and radiation therapy and it completely wore me out. This is Lindsay's first run in about three weeks."

Lindsy has spotted a squirrel in a distant tree and has gone racing across the park to investigate. The attention of all the other dogs in the pack are riveted on Lindsay, but they stay restlessly around the feet of their stationary humans.

"Well she certainly seems happy to be out." Marge comments, watching Lindsay scampering toward the distant tree.

"Say," the other woman asks, "how are you doing with that meditation. Weren't you starting to meditate last time we talked? Did you find that a help while you were going through chemo?"

Barry looks embarrassed. "No. Not at all. No help whatsoever."

"Really?" comments the man with the grey beard. "Cause I've read some great things about meditation recently and how helpful it is to cancer patients."

"Well, I'm sure it is, "Barry agrees. "But there's a fatal flaw in some of those studies. Reya Mellicker had warned me about it. She'd told me not to start meditating right before a predictable crisis. And chemo and radiation are predictable crisis, trust me on that."

"I don't understand, if meditation is such a great help, why wouldn't you?"

"Because there's no time to make meditation a habit in your life. When the crisis hit, I never gave meditation a second thought. Stopped doing it completely. Meditation is a discipline and I wasn't disciplined. I was also drugged to the hilt. At one time I was taking up to ten different drugs a day. All with strange side effects. I couldn't have meditated if you'd paid me."

"Geeze, that's too bad." said the man with the grey beard.

The pack is starting to get even more restless and bored with the conversation and is heading off along the path ahead of their humans. In the distance, Lindsay has decided the squirrel isn't worth the effort and is prancing back toward us.

"I've got a month or more now before surgery, so I've started again." The humans are starting to wander off after their dogs. "I'll let you know how is goes."

Lindsay is dancing delightedly around Barry's feet and he turns his attention toward a distant bench, where he can sit in the sunshine for a few minutes to regain his strength.

It feels good to be out walking Lindsay again.

As they wander off, the park returns to silence. And a little grey squirrel climbs cautiously down from its tree and goes back to searching through the tall grasses for food.