The Rain In Peterborough Falls Mainly On The Umbrella 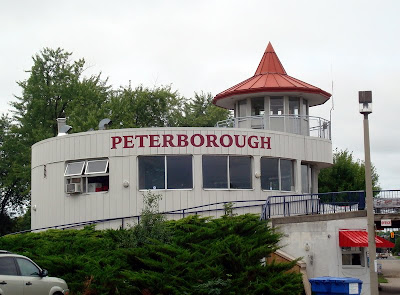 Gradually laughter and high spirits gave way to a quieter contemplation of the passing scenery and the open road as the car rolled on further and further north.

At the Holiday Inn the entrance to the parking lot was blocked by security. Because the concert was taking place in the park beside the Inn, and many thousands of people were expected to attend, the Inn's parking lot looked like an attractive place to leave a car. So we had to prove we were registered in order to gain access to parking, but even then the concert had attracted a full house at the Inn and it was difficult to find an empty space. However, as I was cruising around the parking lot for the third time, a car pulled out right at the door and I quickly grabbed the newly vacated space with a sense of triumph. 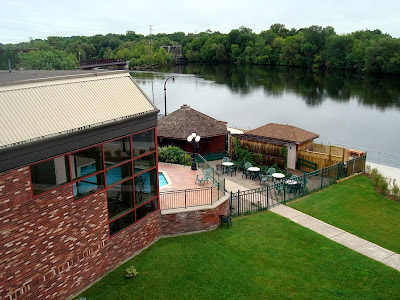 Our room was on the water overlooking the river and the cabana bar which became our first destination. Until the wind started to kick up and the Coors umbrellas began twirling at every table.

"Not looking good," Linda agreed as the first drops of rain started to fall and we ran back to our room for shelter. It was about 90 minutes before the start of the concert and it was teaming out.

So we read for a while and eventually the rain stopped and we headed down to the car to retrieve the lawn chairs we'd brought with us. We carried them over the bridge and past the marina to the park that was already half full of fans. The grass was soaked and so was some of the equipment that the stage hands were trying to dry out. 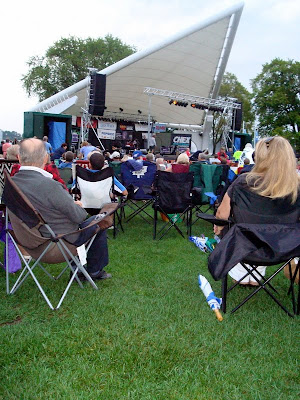 In its place would rise the Peterborough Music Festival, a new name the committee felt would better reflect nature of the event. So we donated and we brought popcorn and we waited for the crew to dry out the equipment.

As we waited, the skies darkened and it began to rain again. The umbrellas came back out, totally blocking our view of the stage.

But then it suddenly stopped raining and umbrellas came down and the Lovin' Spoonful took to the stage. 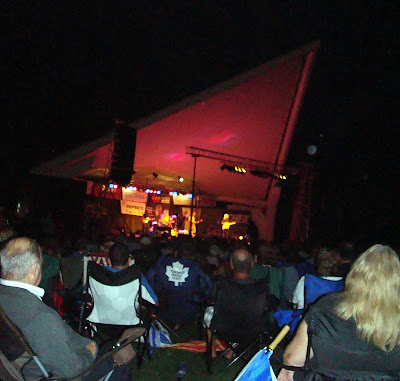 Or, at least, what remained of the Spoonful took to the stage. Three of the original Spoonful and their producer and two new guys gave the concert the feel of a tribute band, with some of the original cast paying tribute to their own past. Canadian band member Jan Yanovsky had died in 2002 and John Sebastian had "creative differences" with the band and was refusing to perform with them.

But the music was fine and true to their jug band roots, the band engaged in easy banter with the crowd. They got us laughing and singing along and remembering a now long ago time when we were young and health was a commodity that could be squandered because we were going to live forever. 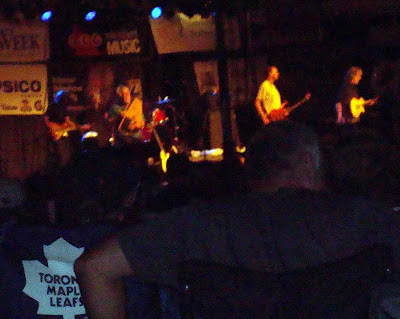 Then, of course, it started to rain again and the umbrellas came out for the third time and the stage vanished once more. Behind us the music was starting to be drowned out by cries of "Put Down the Umbrellas!"

Linda had brought along large plastic garbage bags which she turned into makeshift ponchos for us which kept us warm and dry and blocked no one's view.

Because we all believed in magic, the rain stopped again and the umbrellas came down. All except the patio sized umbrella of the guy two rows in front of us, encased in a micro climate, who was ignoring the chant of the crowd behind him and also ignoring the fact that the rain had stopped. Finally a guy the size of two truck drivers went up and had a quite word with him and that last umbrella came down to loud applause.

"What do you think he said to him?" Linda asked.

"Put down your umbrella or I'll tear your head off?" I suggested.

"Oh no," said Linda, "He wouldn't have been that polite, would he?"

"Well we are in the country, not the City." I pointed out. "And country folk still abide by their manners."

"And we do believe in magic," Linda pointed out.

And the concert went on into the darkening night and our hearts were filled with music. When it was over, we sang our way back past the lights of the marina to the hotel and we said goodnight to the first evening of our vacation.