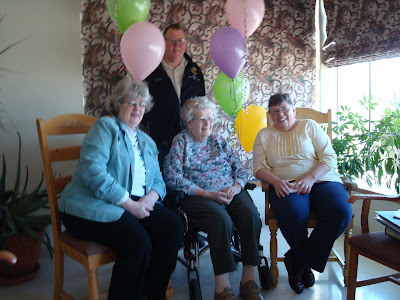 On June 4th, in the midst of my chemo and radiation treatment, Linda's mother passed away in her 90th year.

Her physical health had been deteriorating dramatically over the past year and she had been rushed to hospital several times with kidney failure.

Linda decided to delay the funeral service until a less harried time when I was through my treatment and physically stronger.

Today at 11:00 her mother will be laid to rest beside her husband James.

A large family gathering is expected. Linda has recorded an hour of the music her mother most loved and we spent yesterday evening selecting the photos to be displayed. The service will take place in the chapel at Pinehills Cemetery and, despite the predicted rain, a piper will lead the congregation to the graveside for the internment of her ashes.

The photo above was taken on Stu's 90th birthday in March of this year. She is pictured with her daughters Linda and Margaret and her son Steven. Stu was at least the fifth generation of women in her family to carry the forename "Stuart" after Mary Stuart Queen of Scots. She had no middle name but had always loved the name Mary.

Soldier during WW II, cook, secretary to the chef of the Royal York Hotel, accountant, head of payroll for Guaranteed Trust, world traveler, artist, wife and mother. Rest in peace Stuart, you had one heck of a life!