I'm in a small room down a side alley far from the sounds of hospital activity, resting on a recliner and thinking of food. The room is virtually empty: just the recliner, a table, a mega-cup of watery liquid, a digital clock and me.

And thinking of food.

I haven't eaten all day and my appetite has returned this week, along with a greater ability to eat solid foods. Of course the foods can't be spicy, can't be rich, can't be fried, can't be in the same volume as I once ate. And Linda is pouring through exotic cook books extolling the benefits of healthy eating, health in general. My health in particular.

Perhaps due to my virtual sensory isolation, or because I was hungry, a name floated up to me from the distant past. A name I hadn't thought of in 30 years, Adelle Davis.

As the Beatles were to music, as Timothy Leary was to psychedelics,
as the Maharishi Mahesh Yogi was to meditation, so Adelle Davis was to food in the 60's and 70's. There wasn't a hippie worth the name who didn't possess at least one of Davis many books.

She was an American pioneer in the fledgling field of nutrition in the mid-20th century. She advocated whole unprocessed foods, criticized food additives, and claimed that dietary supplements and other nutrients play a dominant role maintaining health, preventing disease, and restoring health after the onset of disease:

"Research shows that diseases of almost every variety can be produced by an under-supply of various combinations of nutrients... [and] can be corrected when all nutrients are supplied, provided irreparable damage has not been done; and, still better, that these diseases can be prevented."

Davis is best known as the author of a series of books published in the United States between 1947 and 1965. She was also well known for her scathing criticism of the food industry in the United States. In the early 1970s, she addressed the ninth annual convention of the "International Association of Cancer Victims and Friends" at the Ambassador Hotel in Los Angeles. After citing U.S. Department of Agriculture statistics about tens of millions of people in the United States suffering from afflictions such as arthritis, allergies, heart disease, and cancer, she stated, "This is what's happening to us, to America, because there is a $125 billion food industry who cares nothing about health". 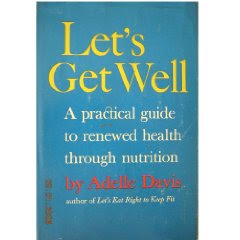 To hippies, and to those like Linda and I who danced around the fringes, she was a superstar. Unfortunately she was also one of the first of the hippie's superstars to die. Her death sent shock waves through the movement and started the first cracks in its foundation.

Members of the scientific and medical communities widened those cracks through criticisms and discrediting her published works both during and after her lifetime. Dr. Edward H. Rynearson, professor emeritus of the Mayo Graduate School of Medicine of the University of Minnesota conducted a careful study of her books, and claims to have found hundreds of errors of fact and interpretation. He states "Any physician or dietitian will find the book larded with inaccuracies, misquotation and unsubstantiated statements."

However, in 1990, an article in Natural Food and Farming magazine examined Adelle Davis's teachings in the light of more recent medical research. The article concluded that "Today's scientific findings both substantiate and expand upon a number of her teachings", and that "Today's research shows that she was indeed ahead of her time... and largely right as well".

Her name brings back many happy memories of a time when the world was changing and peace and love and good health were just within grasp.

A time when, with Adelle's tragic death from bone cancer, it all stated to slip away.

"Barry", a pretty nurse, poked her head around the curtain. "I hope the wait wasn't too boring for you. Its time for your PET Scan."

I slurped the last of my drink and holding the gap in my hospital gown closed, followed her down the hall into a room marked "Danger Radiation No Admittance".

--much of the information in this post that wasn't already in my head, came from Wikipedia