On Tuesday I will be seated in the comfort of a GO Commuter train, rushing from the far suburbs into the very core of the City of Toronto. It will be my first trip to Princess Margaret Hospital without my constant companion, a spunky little girl desperately trying to make sense of a world filled with adults wounded beyond even her powerful imagination.

Her name is Virgina Kate Carey and she lives in the pages of a novel written by Kathryn Magendie, a frequent commenter on this blog.

I will not be starting chemotherapy on Tuesday as I'd hoped. A phone call from my oncologist at ten o'clock last night brought news that a recent MRI has shown no sign of cancer in my right hip. News that was an almost staggering relief.

Yet on the train rides into the city, my mind hasn't been on my medical examinations and the frightening problems they suggest. I've been living in the world of Virgina Kate in the beautiful mountains of West Virgina, admiring her strength and imagination, engaged by her brothers' joy of living despite all odds, appalled and confused as she is by the adults in her life. Haunted, as she is.

On Tuesday, instead of chemotherapy, I will be going for further blood tests and X-rays. The oncologist has never seen anything like the image of my bone marrow revealed by the MRI and doesn't know what to make of it. She consulted a specialist who is also confused. Red blood cells are manufactured by bone marrow and any damage should compromised my red blood cell count. But mine is normal. It's a puzzle.

Tender Graces is a complex novel of powerful characters in exotic settings wrestling with life's relentless and all too puzzling demands. It is by turns horrifying and exhilarating, hilarious and all too real. It has one of the most unlikely heroes in modern fiction. I know you've heard that before, but this hero isn't a ghost or a man from Mars, it is a woman who emerged from her own troubled past and became through her own efforts a normal human being. Normal in a clinical, not a statistical sense. A woman whose very normalcy transforms, and challenges, all the other characters in the novel. And maybe the reader as well. 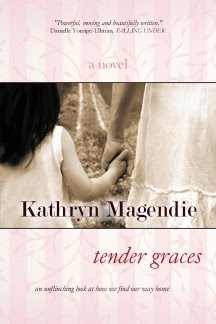 But Tender Graces is finished now. Read from cover to cover. I will no longer have to put up with the smirking glances of other passengers looking at the sprawling six foot man reading the book with the pink cover and photo of the woman in pretty dress holding the hand of the little girl. Despite its appearance, Tender Graces is not a woman's book, at least not exclusively. It is a very adult book in which very real characters wrestle with life's complexities and come to their own conclusions.

It informs us about the human condition with, at times, breathtaking honesty and with a language that is startlingly poetic.

There have been times recently when I wish I would hop on the back of Virginia Kate's imaginary horse Fionadala and just ride up into the mountains higher and higher until the world and its troubles is barely visible far below.

But there are no mountains in Toronto and I will ride the GO with lesser companions to read.

And Linda, of course, who brings her own normalcy to my life.