The Courting of Lindsay

But before we begin, a brief word from our sponsor:

I was down to Princess Margaret Hospital on Tuesday for a complete body x-ray, each section of my body filmed individually and from different angles. X-rayed standing up, x-rayed laying down. Technician scurrying behind the screen during each exposure.

And then I was down in Blood Collection to donate five more vials of blood, beyond the four I gave on Friday.

Then the long train ride home to wait.

But the answer came quickly this time. By three PM I had a call from the oncologist to let me know the x-rays had shown nothing unusual with my bone marrow. Four of the blood tests were back already and also showed nothing unusual. A fifth and more exotic test was still being run and its results wouldn't be back until Thursday. However that test would only have deepened their understanding of a disorder if a disorder was present. Since all the other tests showed no disorder, it would be impossible for that test to produce any positive results.

So the doctor was confirming my starting treatment for my cancer on Tuesday at 8:30 am.

Little did I know there would come a time in my life when I was thrilled to know I would be entering a course of chemotherapy treatments. But I am.

And after upper endoscopes, ultrasound scopes, CT scans, PET Scans, MRI Scans, complete body x-rays and just about every blood test known to science, I am relieved to know I am in perfect health.

Well, except for that cancer thing. 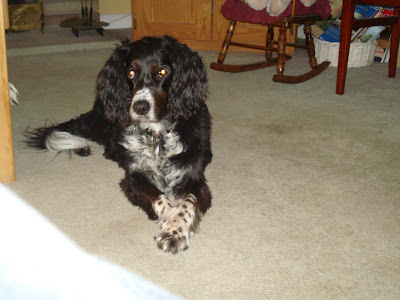 There comes a time in all our lives when romance comes our way. When even little black dogs with waggy tails discover they have a suitor who has fallen madly, passionately in love with them.

"Fallen" being the operative word in that sentence.

Linda and I were doing some work on the garden and Lindsay was roaming about luxuriating in the warmth of the day, a gentle breeze ruffling her hair. I have to say she was looking stunning, an unassuming yet beautiful child of nature.

When a squirrel fell out of the Norway Maple right on top of her.

Her beauty must have been too much for the poor guy. He must have been nearly fatally distracted by the healthy sheen of her coat, the sparkle in her eye, her wet black nose.

Lindsay yelped and jumped a foot. Squirrel and dog stood looking at each other in stunned silence. Linda and I held our breath.

Then squirrel and dog were off racing around the yard, Lindsay's jaws mere inches from the handsome black tail of the squirrel.

But love favors the bold and the squirrel made it to the safety of the Northern Pine tree and was soon high up among its branches. His little heart going pitter-pat, and looking down at his beloved who was dancing about the bottom of the tree barking loudly, jaws gnashing.

Amused by the distraction, Linda and I went back to our gardening. Little did we know the depth of passion we had just seen awakening.

Early the next morning, we were sitting on the deck having coffee. Lindsay was laying on a carpet at the top of the deck stairs looking out at the garden, half asleep.

Suddenly Linda was tugging at my sleeve, her finger to her lips to let me know to be silent. She pointed excitedly down the length of the yard. I looked. And looked again.

The squirrel was jumping cautiously toward us, a tulip in its mouth.

I almost spilled my coffee.

The squirrel took one cautious, yet noble bound forward, the red tulip dangling between its lips.

Lindsay appearing half asleep, disdaining to notice this curious, yet boldly romantic performance.

Another bound closer to the deck. And another. And then the squirrel was at the very bottom of the stairs. The object of his devotion, high above him, pretending not to notice.

He raised one little foot and placed it on the first step. Then a second, and slowly climbed the stairs toward her. Until dog and squirrel were almost nose to nose.

Then a thought penetrated the dazed brain of the sleep bemused Lindsay.

There is a freaking squirrel two inches from your nose, you idiot! The thought said.

Suddenly awake, Lindsay leaped to her feel, the squirrel sprang to the pathway below and ran for the safety of the Norway Maple once again, dog nipping at his tail.

And sadly that's how it ended, the little squirrel scampering high into the upper most branches of the tree. One forlorn tulip left at the top of the stairs on our deck, a potent symbol of unrequited love.

We never saw the squirrel again, but we often wonder if Lindsay ever dreams of the day he came courting.