Lindsay and the Thunderstorm (part2)

This post was written three weeks ago as a follow up to my post on Lindsay and the Thunderstorm. Unfortunately some quirky results from a series of hospital tests bumped it from its duly appointed spot in the rotation. But I've just reread it and liked it and it stands up well on its own, so here it is, better late than never.

The sky ignites and thunder rattles the house. After my experiences on the weekend, I won't be taking Lindsay for her run this morning. The storm snuck up on me then, it won't get a second chance today.

There is another deafening crack of thunder and rain comes crashing against the front window in torrents.

Shivering at my feet, Lindsay is also in no mood to experience the great outdoors. We had a little too much nature in the raw this week to satisfy us both. I pet her and her shivering quiets; she lays down, her head resting on my foot.

Helping her has helped me. I don't jump at the next crack of thunder, instead I settle down to enjoy the show.

The relationship between dogs and man goes back a long way. While we take credit for becoming the dominant specie on the planet, we've had a lot of help from our dogs. And our cats and our horses. They have helped us hunt, warned us of danger, rid our homes of rodents and given us the power to travel vast distances at a rapid pace.

But they have also given us affection. They calm us. Perhaps they even humanize us. When dogs and cats are part of our life, we have less stress and live longer. To a lesser extent, the same holds true for the plants that fill our homes and gardens, the fish that swim in our aquariums and the birds that sing from their cages in our living rooms.

I'm reading a review of Richard Louv's book "The Last child In The Woods" in the London Times:

"Our new word for this week is “biophilia”: the innate need and sensitivity that human beings have for other living things. Put simply, we have been hugging trees for millennia, so it is dumb to stop now. We have a biological need, created by centuries of proximity, for nature. And denying our biophilia makes us behave very oddly indeed. I refer in particular to children – the small, slightly irascible, bug-eyed creatures you find lurking indoors in small groups around the television, computer, fridge or X-box. Pale and biophobic, these children are suffering from Nature Deficit Disorder, an epidemic recently identified in America. Long ago, children roamed in grubby, half-clad packs across the landscape, hitting one another with sticks, making mud pies and hiding in bushes. Now, in the Dark Ages, most of these activities are illegal, or considered downright dangerous. Last month, the online magazine Salon lamented 'the decline in kids’ contact with nature and the rising obesity epidemic; the criminalisation of old-fashioned play; and the loss of the simple pleasure of having dirty hands and wet feet.'"

Of course we live in an urban landscape and our kids need to learn to be street smart. It's a more dangerous world out there than the one I grew up in. As even Louv acknowledges, we can't "...bring back the free-range childhood of the 1950s". We were kicked out of Eden long ago and there is no way back. 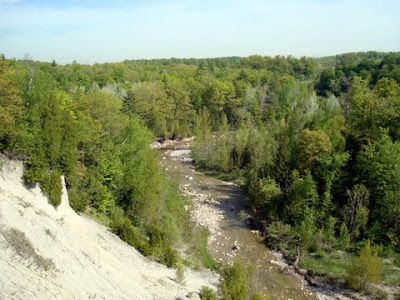 Still,we are an amazingly adaptive specie. Our kids have learned to get a lot of their need for adventure inwardly, electronically. I remember when Alvin Tofflier wrote that book "Future Shock", claiming we would all be paralyzed by the pace of change. That was back in the 60's and here we still are, the pace of change faster than ever. Human resilience and adaptability is an amazing thing.

Still, Louv has accumulated some serious evidence that our kids are paying a high price for getting their adventures electronically instead of naturally.

Outside the storm is letting up and Lindsay will get a run after all; only it will be on her leash and around our block, not along the top of the bluffs today. We compromise and go on.