Informing My Mother That She Is Dead 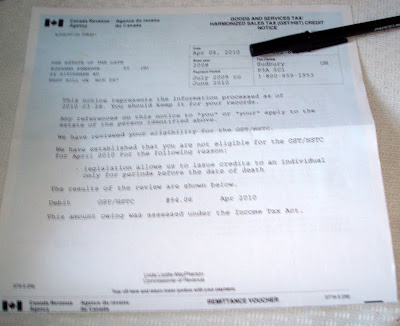 And therefore owes them money.

Trust the tax man to be simultaneously insensitive, bureaucratic, and confusing. And wrong.

My mother, who passed away at the end of February, received a tax notice yesterday informing her that she is not eligible for the GST/HST tax credit because she is dead. Furthermore, because she was dead when they sent her a credit, she owes them their money back.

At least that is how I interpret their letter, because that isn't what they actually say. Oh, they tell her she is dead plainly enough, but they get kind of cute when it comes to asking a dead woman for their money back.

Nowhere in the letter do they actually say, "give us back our money." They merely inform her that she is "not eligible for the GST/HSTC for April..(because) legislation allows us to issue credits to an individual only for periods before the date of death."

The trouble is, my mother's account was closed back in February and when they attempted to direct deposit their $94.06 on April 1, the bank immediately bounced their cheque back to them.

So now I have to phone the tax office, listen to all the options, press button number three, key in my mother's Social Insurance Number, and wait an hour for the next available service representative.

Who will probably not be able to straighten this out any better than the department can write a clear letter.

Not nearly as much fun as dousing myself with gasoline.

But it raises a similar stink.