Each week we are following the lives of members of my Great Grandfather William's family as they appear in this 1890 family portrait. Last time we focused on Isobella Fraser (front row third from the right) and this week we focus on the little boy beside her, Charles Fraser, my grandfather.


Charles was the youngest son born into a large and very dynamic family. His older brothers and sisters went on to become artists and poets and playwrights, founders of Mission societies, mothers of Bishops, teachers and contractors and builders, priests and nuns. His father was the architect behind some of Toronto's more prominent buildings.

He had a lot to live up to. 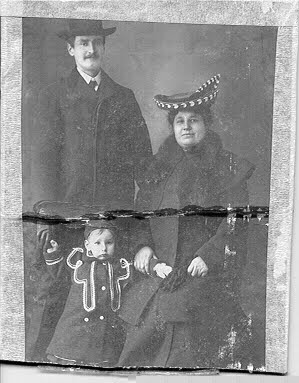 Charles, Kate and their son William
Born in Toronto in 1878 Charles did not follow his siblings into the religious life but instead became a conductor with the Toronto Suburban Railway. He met and later married Catherine (Kate) O'Connor at St. Helen's Church in 1900. Catherine was a recent immigrant to Canada from Ireland arriving via New York City in 1882. While there is some confusion about their ages, Kate would appear to have been at least 4 years older than Charles. After their marriage the couple moved into Kate's parent's home where her brother Dan and sister Mary still resided. Her brother Jeremiah appears to have recently moved out on his own.

Charles and Kate's first daughter Geraldine died in infancy. They moved into Kate's brother Dan's home on Davenport Road for a year where their oldest son, my father, William (Bill) was born in 1902, before moving to Mill Street in Brampton where they lived for several years. Why they moved from the city of Toronto to the small village of Brampton is a mystery, whether this entailed a change of jobs for Charles is also unknown, but it is here that Theresa was born in 1905. In any event the moved did not appear to be successful because they soon moved back to Toronto, where Katherine Veronica was born in 1909.

Around 1912 there was trouble in the family. My father can recall bitter arguments taking place between his parents, while he and his sisters huddled in the upstairs bedrooms. One morning he awoke to find his father gone. My grandmother told my father that he was now the "man" in the family and he was taken out of school and sent to work at Langmuir Trunk Factory on King St. West full time and part time at Len Collins Butcher Shop in the evening. 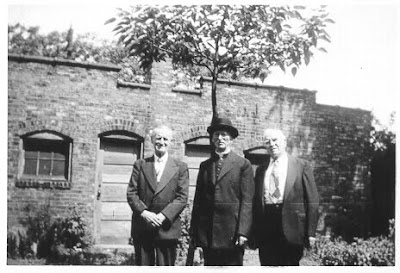 Charles with his brothers John and Alexander in Chicago
After leaving his family, Charles had moved to Niagara Falls where he worked in heavy industry until he lost a finger in an industrial accident. He may also have worked up north as a lumberjack for a time. However, unable to work at his old job, Charles moved to Chicago where he moved in with his brother Alexander and family for a month but ended up staying in the Chicago area until his death on February 19, 1953 (exactly 20 years to the day before his granddaughter Katherine was born on February 19, 1973). During his time in Chicago he worked as a laborer, often helping his older brother on building projects.

After his son Bill returned to Canada following World War Two, Charles and his son corresponded through Bill's new wife Rosanna--but never saw each other. When Charles, in his letters, started asking for money, Bill cut all correspondence off.

Charles never remarried after Kate's death in 1923 and seems to have led a very solitary and unambitious life, comfortable in his role as Uncle to Alexander's children.

Although our lives crossed for a ten year period, I never met my grandfather and many of Alexander's children were unaware Charles had ever been married or had family in Toronto. Charles actions remain a considerable mystery.