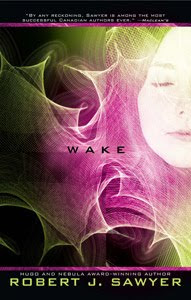 I don't like living on pain killers. I'm no fan of drugs of any kind and for most of my life seldom even took an aspirin. Although, during the height of my combined radiation and chemotherapy treatments last summer I was taking over ten pills a day, at different times and under different conditions.

It had to be done, but I didn't like it.

And I don't like taking Tylenol with codeine now. The pain has migrated to my lower back and makes bending or turning difficult. So when I get fed up with the pain, I take the Tylenol and it either goes away completely or becomes muted enough to live with.

I am resting and trying to concentrate on the last few chapters of Robert J. Sawyer's novel Wake. Trying not to let the pain distract me.

Lindsay wants in from the backyard and putting down my book and getting up to let her in is agony. When I'm able to sit back down and find a pain free position, I tell myself I should have taken the medication while I was up. But I have no desire to put myself through that again just for the sake of future pain relief.

So I pick up Sawyer's book again and loose my self in the world of Caitlin Decter the feisty, blind math prodigy who is undergoing an experimental procedure to help restore her sight.

It has been a long time since I read classic Science Fiction. I didn't know anyone was still writing it. I thought fantasy had taken over the entire genre. Yet here is Sawyer typing away just the other side of Toronto from me. One of his books, Flashforward, has been made into a TV series in the States.

Caitlin, the central character, is a blogger who spends four to five hours a day on the internet. And Sawyer, one of the world's first bloggers, presents blogging in a positive light, unlike the way it's presented in most current fiction.

Being Science Fiction, the operation to implant a mechanical device behind Caitlin's eye leads to be being able to perceive the internet at work when the device is online transmitting data to its inventor, and to becoming aware that the internet has achieved a level of complexity that has permitted it to become aware. That the internet, as an entity, is on the verge of becoming awake.

But it's Sawyer's description of Caitlin's discovery of a fifth sense, one that is for most of us our most dominant sense, that is the most compelling. The difference between how objects look and how they are perceived by the other senses, is exciting and page turning stuff. To help her handle this, Caitlin does what too few fictional characters do these days, she reads. She reads the autobiographies of Helen Keller and Julian Jaynes' The Origin of Consciousness in the Breakdown of the Bicameral Mind.

And as I become engrossed in her struggle to understand the commonplace world of sight that we take for granted, and watch as sight begins to dominate all the other senses she has relied on for so long, I forget my pain, put it aside the way I put aside the fragrance of fresh cut flowers in the room until I'm reminded of them by someone else coming into the room and commenting on them.

And I think, to myself, maybe there is a world beyond our senses. The fabled sixth sense. Maybe it's been hiding right there in front of us all this time?

The world of imagination.