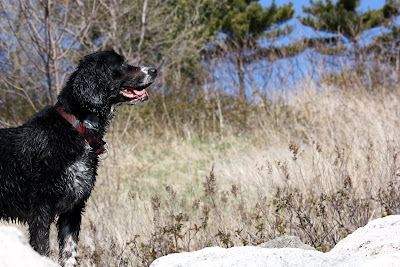 I've only been down to the beach at the bottom of the bluffs once this year.

Through the winter I walk Lindsay along the pathway through the meadow at the top of the bluffs but in the spring and summer we walk the beach. It is usually deserted and strewn with tree trunks and other flotsam Lake Ontario wants to send our way.

But getting to the beach requires walking down a steep pathway and then climbing down fifteen feet of large boulders that form a rough stairway. This year that has created an obstacle for me, not certain I had the strength, or the balance for the task.

Instead, my dog and I continued our daily walks through the meadow where I stood on the 90 metre top of the bluffs and watched the blue waters of the Lake lap against the small beach far below me.

My back pains had reduced to mere feelings of tenderness and much of the strength in my legs had returned. Of course the nerve damage to the bottoms of my feet made them feel as if I were wearing three pairs of socks, but I did still have feeling. It was just very muffled.

The pathway to the beach is cut through a hill side and it wasn't until I reached the final 15' rock fall that I felt the winds off the Lake hit me with force.

Lindsay had already scampered down the rough staircase and had already plunged into the Lake in pursuit of four ducks, which had given her a look of disdain and were paddling away with dignity while she churned, frantically, along behind them.

The first step down was the easiest, a drop of only six inches or so onto the surface of a fairly large boulder. I could feel my shirt rippling against my chest with the strong breeze. The next step was a considerable drop of about two feet and had to be done in two stages. First stepping onto a smaller rock to the side and then down onto the large surface of a massive boulder. It would be the first test of my uncertain balance.

But I did it with ease, if not with grace, and gained considerable confidence. I could do this. I could get down to the beach!

Lindsay had finally given up on the ducks and was swimming back toward me, her head plowing through the water like that of a beaver. Behind her, the ducks were leisurely returning to where they had been before she so rudely interrupted them.

The final rock requires a jump down to the sand and I paused with some misgiving. It was either jump or climb back up. Before me the beach and the water beckoned, stretching off ten kilometers in either direction.

So I jumped. Not a great distance but the sand was hard packed and I landed on weakened legs with a jarring thud.

But I didn't fall.

Lindsay ran up, shaking water from her fur and danced around my feet.

Come on, she was saying. We have the whole beach to ourselves.

And so we did.